Why China is wary of INS Vikrant? 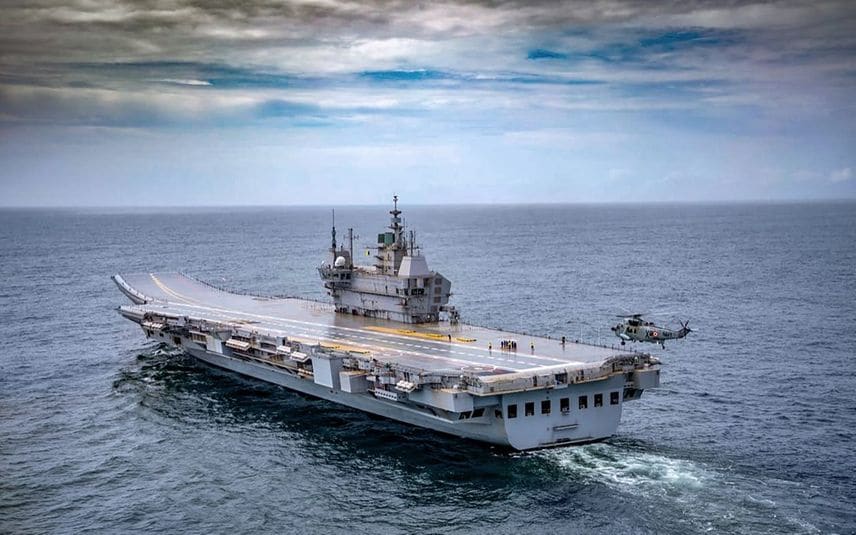 New Delhi: India, with the induction of its first Indigenous Aircraft Carrier, ' INS Vikrant' is set to contain China's iniquitous intentions to control the Indo-Pacific region.

As preparations for India's third aircraft carrier have already been set in motion, it is a clear message to China and Pakistan of its nefarious design in keeping with the theme of being a 'Combat Ready, Credible and Cohesive force' in the Indian Ocean Region.

A CNN report claimed the aircraft carrier had put India into "an elite league of the world's naval powers," and an AFP article hailed it as "a milestone in government efforts to counter China's growing military assertiveness in the region".

The INS Vikrant is a force multiplier that will be a 'game-changer' in the current regional maritime security dynamics as the IAC will boost India's maritime defence capabilities with the in-service carrier INS Vikramaditya.

It is well-known that China, which has been demonstrating an increasingly aggressive posture along the land boundary with India, is also attempting to get a foothold in the Indian Ocean, which is increasingly becoming a stage of rivalry between India and China.

Towards this, China has already acquired a naval outpost in Djibouti and invested in developing the Gwadar port in Pakistan. The Chinese Navy will use these basing facilities to support its ships.

Recently, China also launched its third aircraft carrier, Fujian, and is rapidly building two more aircraft carriers, including its fleet of destroyers and frigates. The vessel - with a flight deck that is approximately 320m long and almost 80m wide according to satellite imagery estimates - is referred to as a Type 003 carrier.

India and China were recently at odds over the docking of a Chinese ''spy ship" in Sri Lanka's Hambantota port for a seven-day replenishment, which India had vehemently opposed due to security concerns.

Sri Lanka initially requested a delay in the ship's arrival over India's objections, but eventually, it got approved following "extensive consultations at a high level." These developments are a cause for concern in the Indian security establishment.

While India has become a preferred security provider for its littoral countries, it cannot be the case with China for the nations in the Southeast Asia region.

China's contentions in the IOR are to protect its sea lines of communication through the Straits of Malacca and the Hormuz Straits. The Hormuz Straits account for 40 per cent of China's oil imports, and the Straits of Malacca accounts for 82 per cent of China's oil imports, popularly known as the 'Hormuz-Malacca Dilemma', and that is the reason why China is attempting to encircling India by building a string of naval bases to surround India's neighbours and various neighbouring island states.

The String of Pearls is a network of Chinese military and commercial bases from the Chinese mainland to Port Sudan in the Horn of Africa.

This network passes through crucial maritime choke points that include the Strait of Malacca, Strait of Hormuz, Strait of Mandeb, Gwadar Port in Pakistan, and Hambantota Port in Sri Lanka.

China has long wanted to control the Indo-Pacific region, which is essential for its security and commercial shipping. The String of Pearls is one such initiative by China in this direction. But with the induction of INS Vikrant, India is now well poised to contain China's String of Pearls.

Notably, INS Vikrant is "the largest ship ever built in the maritime history of India" and can operate a fleet of 30 aircraft, including fighter jets and multi-role helicopters. It is designed with a high degree of automation for machinery operations, ship navigation, and survivability.

Prime Minister Narendra Modi said, "INS Vikrant is not just a warship. This is a testament to the hard work, talent, influence, and commitment of 21st century of India".

With the commissioning of 'Vikrant', India has joined a select group of nations such as the US, the UK, Russia, China, and France with the niche capability to design and build an aircraft carrier indigenously.

He further added that the carrier has filled the nation with "new confidence" and declared India had taken one more step toward becoming a developed nation.

Defence Minister Rajnath Singh said the commissioning of Vikrant demonstrates that India is "fully capable of meeting the collective security needs of the region" and that India's navy is ready to respond to any crisis.

INS Vikrant, built at the cost of around Rs 20,000 crore, successfully completed its fourth and final phase of the sea trials last month. With the construction of 'Vikrant', India has joined a select group of nations having the niche capability to indigenously design and build an aircraft carrier.

At a top speed of about 28 knots and an endurance of 7,500 nautical miles, the IAC can readily be deployed to an area of potential threat. The 262-meter-long and 62-meter-tall aircraft carrier can carry 1,600 sailors and displaces about 43,000 tons of water will bolster its navy capabilities amid growing concerns over the Chinese regime's assertiveness in the region.

The ship has over 2,300 compartments, designed for a crew of around 1,700 people, including specialised cabins to accommodate women officers.

Vikrant has a top speed of around 28 knots and a cruising speed of 18 knots with an endurance of about 7,500 nautical miles. The aircraft carrier is 262 metres long, 62 metres wide and it has a height of 59 metres. Its keel was laid in 2009.

The commissioning of India's first indigenous aircraft carrier is a momentous occasion during the 'Amritkaal of India's 75 years of independence and signifies the country's confidence and prowess.

INS Vikrant has filled the country with a new confidence: PM Modi