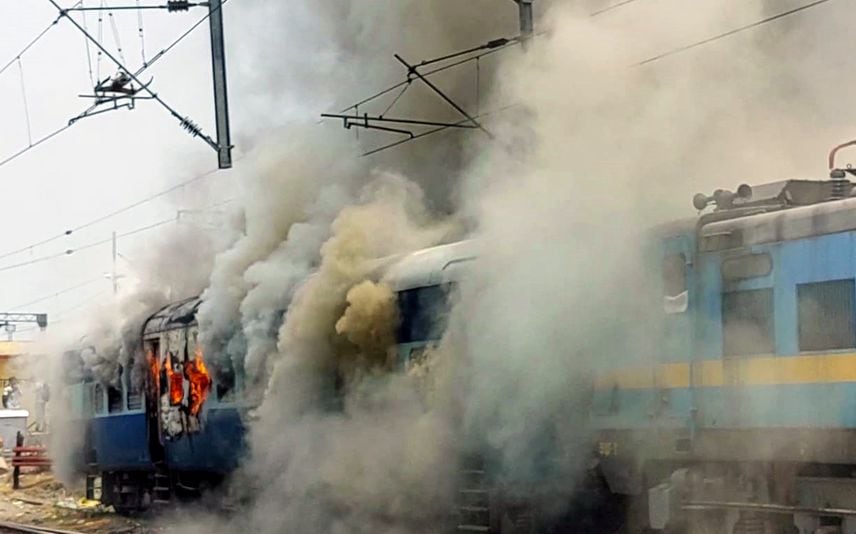 Smoke billows out after youngsters set fire to a train in protest against the 'Agnipath' scheme, in Chhapra / Photo: ANI

Prime Minister Narendra Modi led BJP-government at the Centre yet again has landed in troubled waters with the unveiling of Agnipath recruitment scheme or 'Tour of Duty' (ToD) on June 14. The regime which has always tried to project its military might has pushed the scheme for the recruitment of soldiers in the Army, the Navy and the Air Force, largely on a short-term contractual basis. The scheme, which has received mixed responses, saw violent protests of youngsters in some parts of the country, especially in the northern states.

What is the scheme all about?

The Agnipath scheme is for the recruitment of soldiers in the Army, the Navy and the Air Force, largely on a short-term contractual basis. The youths between the ages of 17-and-a-half and 21 years would be inducted for a four-year tenure while 25 per cent of the recruits will be retained for regular service. The plan according to government is to recruit 46,000 'Agniveers' this year. The process is expected to kick off within a span of 3 months. The monthly salary of an 'Agniveer' in the first year of employment would be Rs 30,000 and the in-hand amount would be Rs 21,000 as Rs 9,000 would go to a corpus with an equal contribution of the government. Subsequently, the monthly salary in the second, third and fourth year will be Rs 33,000, Rs 36,500 and Rs 40,000. Those who are released after four years will get an amount of Rs 11.71 lakh as 'Seva Nidhi Package' and it will be exempted from income tax. Upon the completion of four years of service, based on organisational requirement and policies promulgated by the armed forces from time-to-time, 'Agniveers' will be offered an opportunity to apply for permanent enrolment in the armed forces.

Though the government maintains that the move is to give youngsters a chance to experience life of a soldier, sources claimed that the apparent decision was rolled out to slash the salary and pension bills of the three services, which have been increasing rapidly. It may be noted that the defence budget for 2020-2 is 5,25,166 crore. It included 1,19,696 crore for defence pensions. On the other hand, allocation for revenue expenditure, which includes expenses on payment of salaries and maintenance of establishment, was Rs 2,33,000 crore.

At present, the Army recruits young people under the short service commission for an initial tenure of 10 years, which is extendable up to 14 years. While as per the new scheme the soldiers will be inducted initially for a period of four years and some of them would be retained. The government has packaged the scheme with a good catch salary scheme, tax exemption and allied benefits including non-contributory life insurance cover of Rs 48 lakh for the duration of their engagement period. However, there will be no entitlement to gratuity and pensionary benefits. Critics see red as the government claim that 'Agniveers' will be offered an opportunity to apply for permanent enrolment in the armed forces, but based on organisational requirement and policies promulgated by the armed forces from time-to-time. The reports indicate that 25 per cent of the recruits will be retained for regular service. Over these, critics also worry if the new scheme will compromise the normal recruitment process.

Another issue is of the age factor and futuristic view on the recruits. It may be noted that over the protest, the government on June 16 increased the upper-age limit for recruitment under the scheme to 23 years from 21 years for 2022. The government's initial decision was that youngsters between the ages of 17-and-a-half and 21 years will be inducted. Even after that, those who have expertise in the field have flagged that the move is counterproductive if the age the category is considered.

Lieutenant General (retired) Vinod Bhatia took to Twitter and slammed the scheme and the way it is rolled out. 'ToD (Tour of Duty) not tested, no pilot project, straight implementation. Will also lead to militarization of society, nearly 40,000 (75%) youth year-on-year back rejected and dejected without a job, semi trained in arms ex-Agniveers. Not a good idea. No one gains,' he noted on Twitter.

Opposition parties in the countries have also made comments in similar lines. According to Congress, decision could 'compromise' the efficiency and operational capability of the three services. Congress' chief spokesperson Randeep Surjewala noted that the three armed forces have a special dignity, history, character and tradition of discipline, Surjewala asked whether the four-year contract recruits would adopt this tradition, convention, the spirit of attachment and discipline. Hinting about the future of unemployed youth who has military training, Congress leader and Chhattisgarh Chief Minister Bhupesh Baghel said, 'This means teach the soldiers to use guns and leave them in the society. What do you want to do? If you are enlisting in the army then keep them till the age of 35 years. There is a fault in your intention. It is trying to mislead the youth.

Taking a dig at the decision Rajasthan Chief Minister Ashok Gehlot said, 'Who will be that youngster (recruit)? Will it be an RSS worker or a BJP worker, it remains to be seen.'

Bahujan Samaj Party (BSP) supremo Mayawati alleged that After keeping the recruitment pending in the army for a long time, the centre has now announced a new recruitment scheme 'Agniveer' with a short duration of four years in the army. Even though it has been called an attractive scheme, the youths of the country are dissatisfied and angry. They are openly opposing the change in army recruitment system,' Mayawati said in a tweet in Hindi.

Meanwhile, Left parties want the scheme to be scrapped and be taken up in Parliament for discussion, alleging that it does a 'disservice' to India's national interests. AAP too has not welcomed the scheme and has raised objections.

What's government's reaction to the allegations?

Referring to the budget cut allegation Defence Minister Rajnath Singh said that the government will always make available adequate resources for the three services and there was no question of shortage of funds for them.

On the criticism that the short-duration tenure of 'Agniveers' will harm the effectiveness of the armed forces, the government officials said such a system exists in several countries, and hence, it is already tested out and considered best practice for an agile army. 'I want to assure you that during the implementation and stabilisation of the Agnipath scheme, the Army's operational capabilities and preparedness along the borders and the ability to deal with internal security challenges will be fully maintained, said Army Chief Gen Manoj Pande.

Similarly, the government has announced a raft of post-retirement employment possibilities. Home Minister Amit Shah's office on Twitter has informed that it has decided to give priority to Agniveers who have completed four years under this scheme in the recruitment of CAPFs and Assam Rifles'. Ministry of Education (MoE) has decided to launch a special three-year skill-based bachelor degree programme for them. The degree programme offered by the Indira Gandhi National Open University (IGNOU) will be recognised both in India and abroad for employment and education, an MoE official said. The Army, Navy and Air Force will sign a memorandum of understanding (MoU) with IGNOU for implementation of the scheme.

Meanwhile, the finance ministry held a meeting with heads of public sector banks and financial institutions to explore employment opportunities for 'Agniveers' in their respective organisations. It was also decided that banks would explore possibilities of supporting 'Agniveers' through suitable credit facilities for skill upgradation, education for setting up businesses and to take up self-employment, a finance ministry statement said.

Amid this Shivraj Singh, CM of BJP ruled Madhya Pradesh said that 'such jawans, who would have served in the Army under the Agnipath scheme, will be given priority in the Madhya Pradesh Police recruitment. It is learnt that more BJP states will join the club with offerings to subdue the issue.