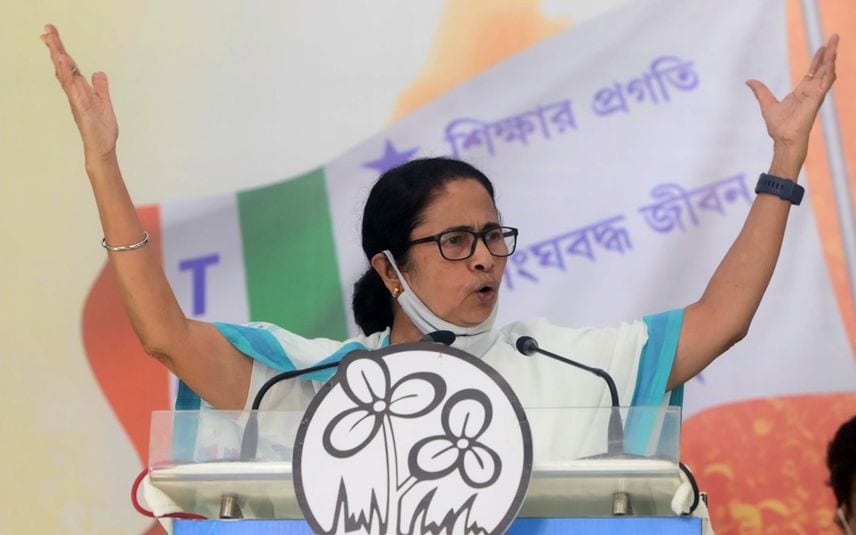 Kolkata: West Bengal Chief Minister Mamata Banerjee on Friday held Damodar Valley Corporation (DVC) responsible for the current "man- made" flood in South Bengal which she claimed was a result of unplanned and increased discharge of water from upstream dams and barrages.

The chief minister said the lack of dredging of dams and barrages controlled by the central government-run DVC has led to increased silting in reducing the holding capacity of dams such as Maithon, near Dhanbad. This, she claimed, led to excessive discharge of water into Bengal whenever there was heavy rains in upstream states such as Jharkhand, causing floods in vulnerable low lying districts of southern Bengal, and urged authorities controlling the dams to dredge their reservoirs.

Banerjee warned of "massive protest" if steps were not taken to prevent recurrence of floods. Two persons including a child died after a house collapsed in Ghatal in Paschim Mednipur district as flood waters breached embankments and overnight rains added to people's woes.

Chief Secretary H K Dwivedi separately told a press meet on Friday that 22 lakh people were affected in five districts by floods as the mighty Damodar and Rupnarayan river were flowing above extreme danger level.

"One child and one adult have died of house collapse at Ghatal in Paschim Medinipur and the condition may worsen. This is the second flood we are facing in South Bengal in a span of two months. One of the main reasons behind this flood is the amount of water being discharged (upstream) goes beyond the water bearing capacity of these rivers," Dwivedi said.

The top official who held meeting with PWD and irrigation department officials, said one lakh houses were damaged, four lakh people were evacuated while 2 lakh people were taken to relief camps. He said a total of eight army columns have been deployed in three districts - three columns in Paschim Bardhaman, three in Hooghly and two in Howrah.

Bengal's opposition parties, BJP and Congress, however said DVC had as usual apprised the Bengal government before releasing excess water. "To hide her government's failure in aiding people, failing to shift marooned people to safer places … the chief minister is trying to shift the blame to DVC," said Leader of the opposition and BJP leader Suvendu Adhikari. WBPCC president Adhir Chowdhury too said the state is always informed by DVC of any release of water from its barrages.

Veteran TMC MP Sougata Roy shot back stating "what BJP or Congress says on the issue is blatantly false," and insisted that DVC released water without consulting the West Bengal government. Banerjee said "If this (flood) occured after heavy rainfall we would have understood (the situation) and tackled it. But it took place because of discharge of water from the dams and barrages by DVC. I request them to carry out dredging for Bengal cannot keep facing similar situation every time there is heavy rainfall.”

She cautioned that such frequent floods could “spiral into a massive agitation, which I do not want." The Bengal chief minister alleged that excess water was discharged following heavy rainfall on the intervening night of Wednesday and Thursday at around 3 am. "The discharge resulted in flooding in Asansol, Bankura and Purulia. Again yesterday, DVC discharged around one lakh cusec of water," she alleged.

Banerjee claimed that reservoirs controlled by DVC have not been cleaned in the last 50 years and that her repeated requests on the issue were not heeded. She said senior leaders of her party including Firhad Hakim, Malay Ghatak among others will supervise the flood-situation in the affected districts where around one lakh people have been evacuated to safe shelters.