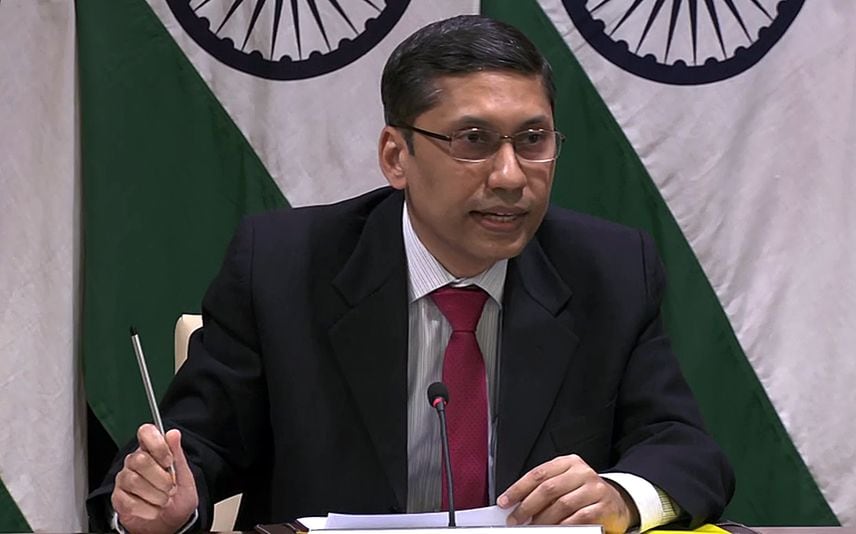 New Delhi: India on Thursday said the area where China is reportedly constructing a bridge across the Pangong Tso in eastern Ladakh is considered an "occupied area" by New Delhi for decades, and that it monitors such developments.

His comments came while responding to questions on reports of China building a second bridge across the strategically-located Pangong Tso region.

"We have seen the reports on the bridge. It is a military issue...We consider it to be an occupied area. The Ministry of Defence will be able to comment on the details," Bagchi said.

"The area that is referred to...we have always felt this was occupied and we have had our hope for decades," he said, adding, "We monitor such developments."

Bagchi also indicated that there was a lack of clarity on whether a second bridge is being built in the area or it is the expansion and widening of the first bridge.

In January, when reports of China building the first bridge across the Pangong Tso emerged, the MEA had said it is located in an area that is under illegal occupation of China for 60 years.

According to satellite imagery and military experts, the new bridge is adjacent to the first one.

The spokesperson said Jaishankar had conveyed to Chinese Foreign Minister Wang Yi during his visit to New Delhi in March about India's expectations regarding the military face-off.

"You are also aware that Foreign Minister Wang Yi was here in March this year and the external affairs minister conveyed our expectations to him," he said.

"As the external affairs minister had said then talking to the media subsequently that the friction and tensions that arise from China's deployments since April 2020 cannot be reconciled with a normal relationship between two neighbours," Bagchi said.

"So we will continue to remain engaged with the Chinese side, both at the diplomatic and the military levels to ensure that the directions given by the two ministers are implemented fully," he added.

The spokesperson said India had various rounds of conversations with the Chinese side at the diplomatic and military levels.

People familiar with Chinese construction on Wednesday said China is building a second bridge in an area held by it around the strategically key Pangong Tso in eastern Ladakh.

They said the new bridge is being built in an area that is over 20 km from the Line of Actual Control (LAC).

The eastern Ladakh faceoff began on May 4-5 in 2020. India has been insisting on the restoration of status quo ante prior to the standoff.

India and China have held 15 rounds of military talks so far to resolve the eastern Ladakh row. As a result of the talks, the two sides completed the disengagement process last year on the north and the south banks of the Pangong lake and in the Gogra area.

India has been consistently maintaining that peace and tranquillity along the LAC were key to overall development of bilateral ties.

Each side currently has around 50,000 to 60,000 troops along the LAC in the sensitive sector. PTI