"These decisions had been pending for decades but we took them in national interest and we will remain firm on them," he said while addressing a function in Varanasi after unveiling a statue of BJP ideologue Deendayal Upadhyaya. 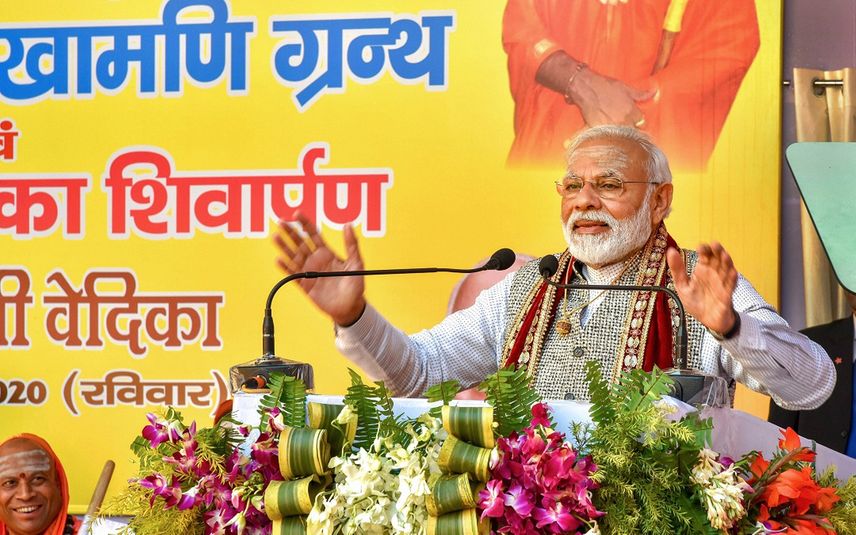 Varanasi (UP): Prime Minister Narendra Modi on Sunday said his government had taken decisions on Article 370 abrogating special status for J&K and the Citizenship Amendment Act (CAA) in national interest.

"These decisions had been pending for decades but we took them in national interest and we will remain firm on them," he said while addressing a function in Varanasi after unveiling a statue of BJP ideologue Deendayal Upadhyaya.

The Prime Minister said that Deendayal Upadhyaya always focused on the last man in the line with his 'antyodaya' concept.

"Our government is working on his concept of self-reliance and self-service. Our schemes like free gas connections and toilets cater to the poorest of the poor," he said.

"Projects worth Rs 25,000 crore have either been completed or are in the process of being completed in Varanasi and this is due to the blessings of Lord Shiva who has given me the responsibility of serving you. Projects worth Rs 12,000 crore that have been launched today include hospitals, schools, roads, flyovers and water projects. We are trying to turn western Uttar Pradesh into a medical hub with improved connectivity," he said.

Modi said that when "we talk of a five trillion dollar economy in India, we must remember that tourism is a major part of it".

"Besides nature, heritage tourism has a strong role to play in achieving the goal. Also, along with Varanasi other holy sites are being developed using new technologies. The Kashi Vishwanath temple complex will soon get a new attractive look. The Ram temple in Ayodhya will also turn into reality because the trust for construction has been formed," the Prime Minister said.

He pointed out that Sri Lanka Prime Minister Mahinda Rajapaksa, who recently visited Varanasi and Sarnath, was extremely impressed with the city.

The Prime Minister hoped that the Deendayal Upadhyaya memorial will continue to inspire generations to come.

The Prime Minister earlier flagged off the IRCTC's Maha Kaal Express through video link. The train will connect the three Jyotirling pilgrim centres of Varanasi, Ujjain and Omkareshwar.

A two-day exhibition -- 'Kashi Ek Roop Anek' - was also inaugurated by the Prime Minister at Pandit Deendayal Upadhyaya Hastakala Sankul where he interacted with buyers and artisans coming from different countries of the world including America, England and Australia.

'Kashi Ek Roop Anek' showcases products from over 100 artisans from all over Uttar Pradesh. Artists and weavers at the event will also be imparted skills for improving the quality and branding of their wares suitable to the larger national and international markets.

New Delhi: India on Tuesday said it is "fully supportive" of Sri Lanka's democracy, stability and economic recovery, a day after the island nation's ..

New Delhi: The Supreme Court Tuesday asked the Centre to apprise it about the views on the issue of protection of interest of citizens till the colonial-era ..