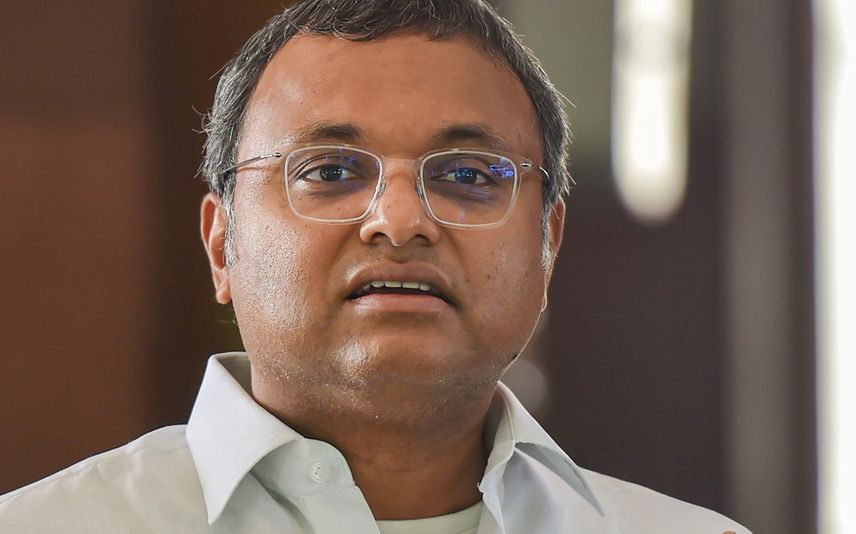 New Delhi: The Enforcement Directorate has opposed the anticipatory bail plea by Congress MP Karti P Chidambaram in the alleged Chinese visas scam, saying that the investigation so far has revealed his involvement in the present offence which endangers national security for financial gains.

In its July 11 status report, the agency stated that success in an interrogation would elude if the accused knows that he is protected and the grant of anticipatory bail in economic offences would definitely hamper an effective investigation.

The agency informed that the investigation is still in its preliminary stages and shall be prejudiced if details are disclosed at this stage as Karti is a sitting member of Parliament and highly influential and urged that the status of the probe be perused from the case record.

"The present offence of endangering national security for financial gains to the detriment of the general public of the country is severe Economic offence having a detrimental impact on the economy and the society," ED said adding that Karti is a flight risk and allegedly has criminal antecedents.

ED has registered the money laundering case against Karti and others in the alleged scam about the issuance of a visa to 263 Chinese nationals in 2011 when his father P Chidambaram was the home minister.

Justice Poonam A Bamba, on Tuesday, listed Karti's anticipatory bail plea for hearing on August 18 after the counsel for Enforcement Directorate (ED) informed that Additional Solicitor General SV Raju was not available.

The investigating agency orally said that its earlier assurance concerning no coercive action against Karti would extend till the next date.

On June 12, ED had orally assured the high court that no coercive action would be taken against him till July 12.

Karti, represented by lawyer Arshdeep Singh, had approached the high court after his anticipatory bail plea and that of two others was dismissed by the trial court on June 3 on the ground that the offence was of a very serious nature.

In the status report, ED also said that the ECIR (Enforcement Case Information Report) in the case cannot be given to Karti as it is an internal document and there is no requirement in law to provide the same and that the apprehension of arrest is unfounded at this stage.

It further stated that Karti is a flight risk and has criminal antecedents as around four criminal cases are pending against him, which are being investigated by both CBI and ED.

“Success in such interrogation would elude if the accused knows that he is protected by the order of the court. Grant of anticipatory bail, particularly in economic offences would definitely hamper the effective investigation,” it further argued.

ED also emphasised that “in recent times several high profile individuals having deep roots and respect in the society have left the country /to evade the process of law in India”.

The agency added that the offence of money laundering is still ongoing and Karti can influence witnesses and tamper with evidence.

“The Applicant has been and continues to be a Member of Parliament from Tamil Nadu. The Applicant's father has been a Union Minister for around ten years including having charge of the Ministry of Home Affairs, the nodal ministry for the CBI, and also the Ministry of Finance, the nodal ministry for the present Agency, which itself gives rise to the apprehension of the likelihood of influencing of witnesses and tampering of evidence,” the status report said.

ED has earlier said that the actual magnitude or volume of the processed or laundered amount of money in the case was yet to be established during the investigation and the bribe amount of Rs 50 lakh in the CBl case cannot be taken or considered as the basis of the present case.

The agency has registered its case under the provisions of the Prevention of Money Laundering Act (PMLA) taking cognisance of a recent first information report by the CBI in the same case. PTI