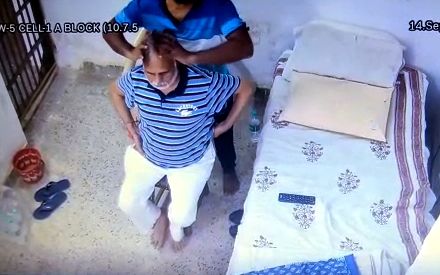 Sisodia, who is currently in charge of the Prison department that was earlier held by Jain, alleged his colleague has been framed in false case and that the Bharatiya Janata Party (BJP) is resorting to such "theatrics'' as it is "losing the MCD and Gujarat polls".

BJP MP Parvesh Verma along with his party colleagues Manjinder Singh Sirsa and Tajinder Pal Bagga lodged a police complaint against Jain and Kejriwal, accusing them of carrying out "illegal" activities in the jail.

Bagga took a dig at Sisodia for defending Jain, saying he has fought with his physiotherapist as to why he was not given foot and head massage for his spinal injury.

A video purportedly from Jain's cell was played in a press conference by the BJP where the party's national spokesperson Gaurav Bhatia termed the AAP as a "Spa Massage" party. Several other videos were also shared on social media.

"Where is Kejriwal hidden now? Jain can be seen enjoying massage and meeting visitors in his cell in total violation of rules and the prison manual. This VVIP culture in jail is dangerous for democracy," Bhatia said.

Delhi BJP president Adesh Gupta who had earlier demanded Jain's transfer to any jail outside Delhi has written a letter to LG VK Saxena requesting a high-level inquiry into facilties given to the AAP minister in jail.

The Delhi Prisons department comes under the Delhi government.

In light of the new revelations, the allegations made by jailed conman Sukesh Chandrashekhar against Jain should be probed, leaders of the BJP and the Congress said.

Chandrashekhar had written to the Lieutenant Governor alleging that Jain 'extorted' Rs 10 crore from him in 2019 to ensure his safety in prison. Gupta also demanded Kejriwal sack Jain from his Cabinet.

Jain, who is in judicial custody at Tihar over money laundering charges, for the last five months, can be seen in the purported videos from his cell getting back and foot massages, reading some documents and talking to visitors while lying on a bed. Mineral water bottles and a remote are also seen. In one video, he is seen getting a head massage while sitting on a chair.

Earlier this week, a Tihar jail superintendent was suspended for alleged involvement in providing special treatment to Jain in the prison.

The Enforcement Directorate (ED) had claimed in a court that Jain was getting special treatment inside the Tihar Jail including massage and special food, and provided CCTV footage to substantiate the claim.

Sisodia accused the BJP of leaking Jain's videos from Tihar jail and claimed that he was undergoing physiotherapy for a spine injury. He went on to add that the Enforcement Directorate (ED) was directed by the court to not leak the video in question.

"Leaking the video is a violation of the court's direction," Sisodia added.The BJP is resorting to "cheap theatrics", he alleged.

"He (Jain) had sustained an injury to his spine and even underwent two surgeries. The doctor had advised physiotherapy upon discharge and those videos show him getting physiotherapy," Sisodia asserted.

"They (opposition) should fight the polls to the Municipal Corporation of Delhi (MCD) on issues," he said.

BJP IT department head Amit Malviya asked Kejriwal why he had not sacked Jain.

"Despite being in jail for the last five months, Satyendar Jain continues to be a minister in Arvind Kejriwal's cabinet. He has been provided a masseur, TV, bed, bottled water and all facilities, in gross violation of jail rules. Why would Kejriwal not sack him? What is he scared of?" Malviya tweeted.

Congress national spokesperson Alka Lamba lashed out at AAP over the videos and sought to know why Chief Minister Kejriwal had not yet removed Jain from his post.

"Arvind Kejriwal should answer what is his compulsion that he has not yet sacked his reference minister Satyendar Jain from the post? If you look at the viral video, it looks less like a jail barrack and more like a hotel room," Lamba said.

Lamba further alleged that with the kind of facilities being provided to Jain in jail, "the allegations levelled against him by a thug (like) Sukesh Chandrashekhar seem to be true".

Satyendar Jain was getting massage from POCSO accused, not physiotherapist: Source