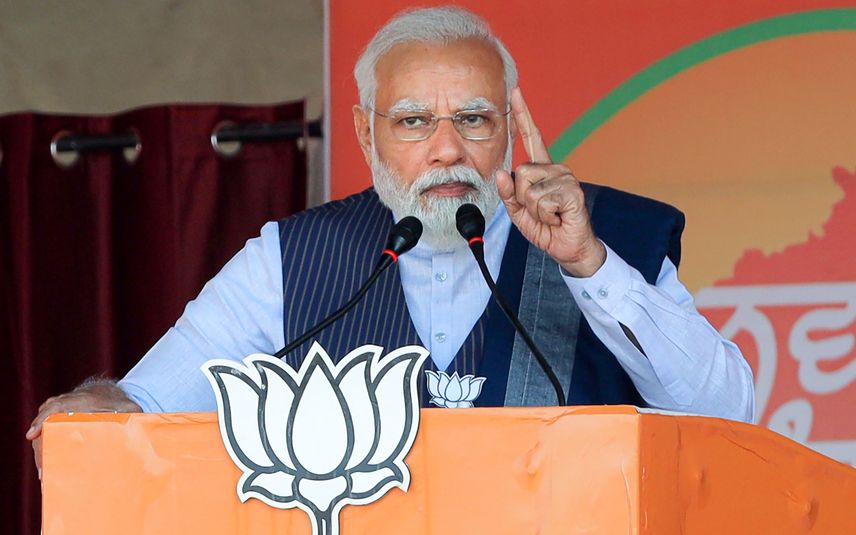 Ahmedabad: The ruling Bharatiya Janata Party in Gujarat and the Aam Aadmi Party engaged in a verbal tussle on Monday over a video in which the AAP's state unit president has purportedly used a derogatory word against Prime Minister Narendra Modi.

In the video, Gujarat AAP president Gopal Italia purportedly berates Modi for enacting a "drama" to attract votes and then goes on to use the term "neech aadmi" (lowly person) to describe him. In the clip, the AAP leader also allegedly half uses another abusive term to claim the PM was making a "fool" of citizens.

It has been reported that the video is from 2019 and was made during the run-up to the general elections.

Italia, however, told reporters he was being targeted by the BJP as he was a "Patel, a community that has been associated with a movement that had caused a lot of damage" to the saffron party.

The Arvind Kejriwal-led party, which did not deny the veracity of the video, said the BJP was bringing out old issue as it had no answers to questions on what it did for the people during 27 years of its rule in Gujarat, where Assembly polls are due in the next few months.

"I was thinking about their enmitywith me, then I figured out I am a Patel. The BJP is a party with an anti-Patel mentality, because the community has been associated with the (quota) movement which caused a lot of damage to the BJP," Italia said in his defence.

Rajya Sabha MP and the AAP's Gujarat co-in charge Raghav Chadha seconded Italia, saying his party colleague was being "targeted possibly because he is from the Patel community".

"Gopal Italia is a common man...If he has made an objectionable comment, then punish him, but at least respond to the questions being asked by the public as to what the BJP did in 27 years (in government in Gujarat)," Chadha told reporters in Rajkot amid campaigning for the party.

The video has surfaced on social media at a time when Modi is on a three-day visit to the state.

State BJP spokesperson Yagnesh Dave shared the video with a caption, "Using such low level words for the Prime Minister of India shows the bad mentality of Gopal Italia and Aam Aadmi Party."

Attacking the AAP over the video, state BJP vice-president Gordhan Zadafia said the people have taken a very serious view of the words used against Modi and the backlash would be known once Assembly poll results are out.

He said all parties can fight polls but using such words against a towering personality like Modi was painful.

"It is not the BJP's pain alone but that of the people of Gujarat. Their results after the polls will show this," Zadafia said.

Asked about the AAP's statement on what the BJP had done in its 27-year-long rule in Gujarat, the former minister said many party workers in the state were ready to debate the issue.

"Secondly, we have not given money to public as freebies, but helped them stand on their feet," he said in an apparent reference to the AAP's poll promises or "guarantees" to Gujarat voters.

Some of these promises were made by the AAP in Punjab and Delhi, where the party is on power.

Addressing a press conference at the BJP headquarters in New Delhi on Monday, party spokesperson Sambit Patra said the kind of language used by the Kejriwal-led party for the Prime Minister "exposes AAP and shows what is their intention".