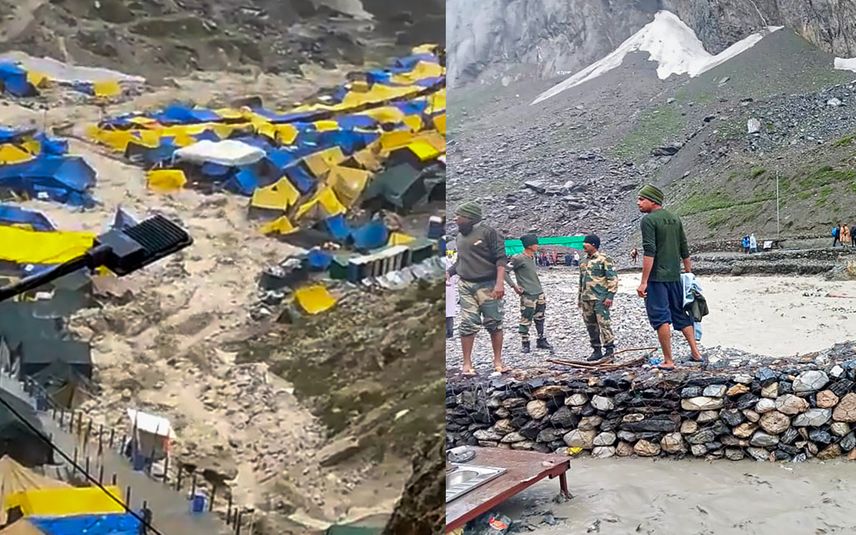 Srinagar: Pilgrims who managed to reach Sonamarg's Baltal base camp from Amarnath holy cave after it was hit by the cloudburst narrated their harrowing experiences.

Deepak Chouhan, a pilgrim from Uttar Pradesh's Hardoi told ANI, "A stampede-like situation happened there, but Army supported a lot. Many pandals were washed away due to the water."

Another pilgrim Sumit from Maharashtra said, "the floods triggered by the cloudburst carried a large number of stones with it. We were two kilometres away from the cloudburst site"

Another pilgrim said, "When the cloudburst took place, we could not believe it. After a while, we only saw water and water. We were a group of seven to eight people, by Bholenath's grace, we all got saved. However, we all had a harrowing experience as we witnessed people and bags swept away with the water."

"Within 10 minutes of the cloudburst, eight casualties were reported. The water carried a large number of stones with it. There were approximately 15,000 pilgrims who came for the pilgrims. The pilgrims continued to come despite heavy rains," he added.

Earlier on Friday, Thirteen people were killed and over 48 others injured when a cloudburst struck the area near the holy shrine of Amarnath, said Dr A Shah, Chief Medical Officer Ganderbal, Jammu and Kashmir.

As of now, all the injured patients are being taken care of at all three base hospitals: Upper Holy Cave, Lower Holy Cave, Panjtarni and other nearby facilities en route to the holy cave by the health care workers deputed at these stations.

A cloudburst incident took place at the holy cave area of Amarnath on Friday which resulted in a heavy discharge of water in the 'Nallah', adjoining the holy cave.

According to the Indo-Tibetan Border Police (ITBP) officials, the cloud burst occurred at the lower holy cave (Amarnath) at around 5.30 PM and the rescue teams rushed to the spot.