Not satisfied with steps taken by UP govt in Lakhimpur Kheri violence case, says SC 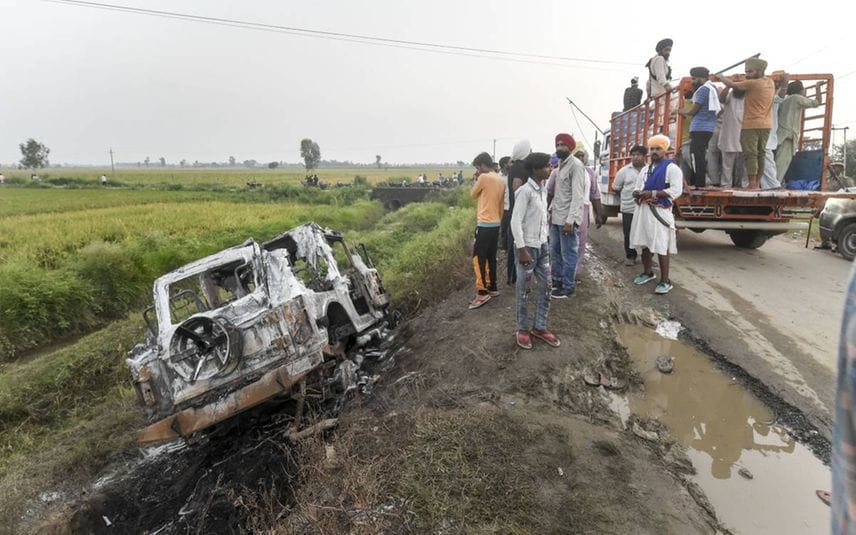 A scene after the violence in Lakhimpur Kheri | Photo: PTI

New Delhi: The Supreme Court Friday said it is not satisfied with the steps taken by the Uttar Pradesh government in the Lakhimpur Kheri violence case in which eight persons were killed on October 3 and questioned it over not arresting the accused against whom FIR has been lodged.

A bench headed by Chief Justice N V Ramana told senior advocate Harish Salve, representing the UP government, to communicate to the top most police official that evidence and other relevant materials in the case are not destroyed.

“What is the message you (state) are sending,” said the bench, also comprising Justices Surya Kant and Hima Kohli.

It asked the state whether accused in other cases lodged under section 302 (murder) of the Indian Penal Code are treated the same way.

“If you see the FIR, section 302 is there. Is it the same way you treat other accused,” the bench asked, while terming it as a “very serious charge”.

The top court has posted the matter for hearing on October 20.

Four farmers were mowed down by an SUV in Lakhimpur Kheri when a group agitating against the Centre's three new farm laws was holding a demonstration against the visit of UP Deputy Chief Minister Keshav Prasad Maurya on October 3.

Two BJP workers and a driver were beaten to death allegedly by the angry protesters, while a local journalist was also killed in the violence.

An FIR under section 302 of the IPC has been registered against the Union Minister of State for Home Ajay Mishra's son Ashish Mishra and others in the incident in Tikonia police station but no arrest has been made so far.

Farmer leaders have claimed that Ashish was in one of the cars that allegedly knocked down the protesters but the minister has denied the allegations.

Several farmer organisations are protesting against the passage of three laws -- The Farmers Produce Trade and Commerce (Promotion and Facilitation) Act, 2020, The Essential Commodities (Amendment) Act, 2020 and Farmers (Empowerment and Protection) Agreement on Price Assurance and Farm Services Act, 2020 since last November.

The apex court had stayed the implementation of these laws in January.

Initially, the protests started from Punjab in November last year and later spread to Delhi, Haryana, and Uttar Pradesh. PTI