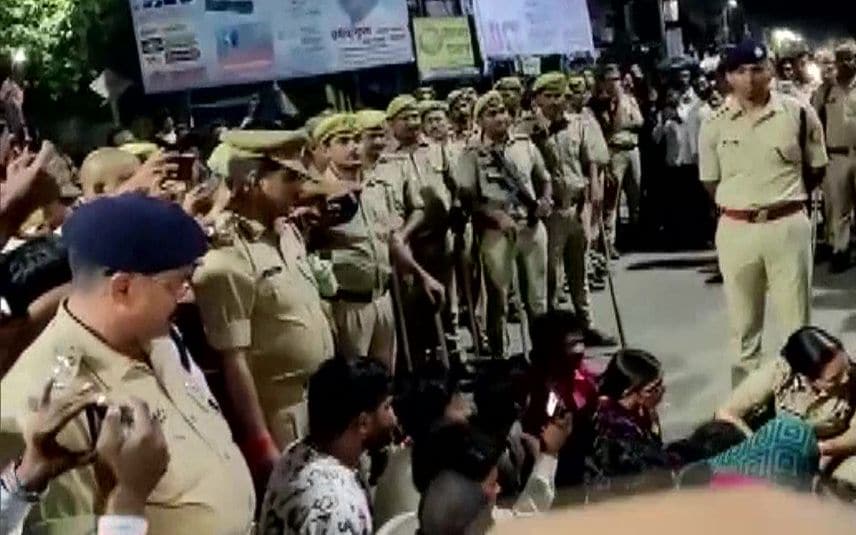 Lakhimpur Kheri: The bodies of two minor sisters, belonging to the Scheduled Caste community, were found hanging from a tree in Lalpur Majra Tamoli Purva village under the Nighasan police station of Lakhimpur Kheri district on Wednesday evening.

Local villagers and the girls' family marched a protest and blocked the road demanding justice for the victims.

The family of the deceased has accused three men of rape and murder and staged a demonstration at the Nighasan crossing, a few kilometres from the village.

Lakhimpur Kheri superintendent of police (SP) Sanjiv Suman, along with the police force, rushed to the protest site and assured villagers that strict action will be taken against the accused.

Lucknow range inspector general (IG) of police Laxmi Singh, while talking to ANI, said, "Dead bodies of two girls were found hanging from a tree in a field outside a village in Lakhimpur Kheri. No injuries were found on the bodies."

The bodies have been sent for post-mortem and reports are awaited.

"Other things to be ascertained after post-mortem. We'll try to expedite the probe," IG further said.

The police officials presented there urged the villagers to call off their roadblock and cooperate with the post-mortem examination.

Meanwhile, following the matter, Congress has questioned the law and order in the state.

Expressing her grief over the incident, Congress leader Priyanka Gandhi Vadra slammed the state government and said, "The incident of murder of two sisters in Lakhimpur (UP) is heart-wrenching. The relatives say that those girls were abducted in broad daylight. Giving false advertisements in newspapers and TV every day does not improve law and order. After all, why are heinous crimes against women increasing in UP?"

However, more information on the matter is awaited. (ANI)