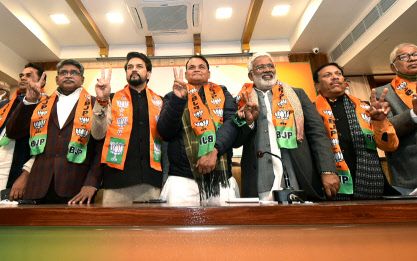 Lucknow: Ahead of the assembly elections, Samajwadi Party (SP) MLC Ghanshyam Lodhi, who joined Bharatiya Janata Party (BJP) on Sunday slammed SP saying that they never worked for the development of other backward classes (OBCs).

Lodhi also alleged that party chief Akhilesh Yadav has inducted people into the party who have criminal cases against them.

Speaking to ANI, Lodhi said, "Samajwadi Party says something else and does something else. SP has been in power for four terms, but they never worked for the development of OBCs. Akhilesh Yadav has added such people to his party who have 10-20 criminal cases against them."

Meanwhile, BJP released its first list of 107 candidates for the upcoming Assembly polls in Uttar Pradesh in which it denied tickets to 20 sitting MLAs and fielded 21 new candidates.

The party has released the list for the first and second phase of elections scheduled to be held on February 10 and 14.

Keeping the caste arithmetic balanced and for gaining voters, BJP has fielded women on 10 seats, OBC candidates on 44 seats and scheduled castes (SC) candidates on 19 seats, accounting for 60 per cent of the total.

Elections for the 403 Assembly constituencies in Uttar Pradesh will be held in seven phases starting February 10.

Jolarpettai (TN): "I firmly believe there is no need for capital punishment," AG Perarivalan said hours after the Supreme Court ordered for his release, ..

New Delhi: The Union Cabinet on Wednesday approved advancing the target of blending 20 per cent ethanol in petrol by 5 years to 2025-26 as well as allowing ..

New Delhi: The Indian Navy on Wednesday successfully carried out the maiden test firing of the first indigenously developed naval anti-ship missile from ..