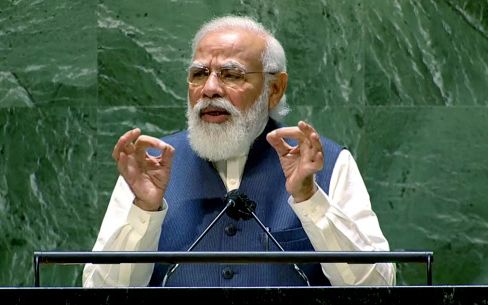 United Nations: Prime Minister Narendra Modi said on Saturday that countries with "regressive thinking" that are using terrorism as a "political tool" must understand that it is an equally big threat for them also, in a veiled attack on Pakistan which is often accused by its neighbours of providing safe havens to terrorists.

Addressing the 76th UN General Assembly here, Prime Minister Modi also said that in order to strengthen the rules-based world order, the international community must speak in unison, in an apparent reference to China which is flexing its military muscles in the Indo-Pacific.

Noting that the world is facing an increased threat of regressive thinking and extremism, Modi said countries that are using terrorism as a political tool have to understand that terrorism is an equally big threat to them.

"It is absolutely essential to ensure that Afghanistan's territory is not used to spread terrorism and for terrorist activities,” he said. “We also need to ensure that no country tries to take advantage of the delicate situation in Afghanistan and use it for its own selfish interests.”

Pakistan's neighbours, including Afghanistan and India, and the US have long accused Islamabad of providing safe haven and support to militants, a charge denied by it.

Modi said that oceans are also a shared heritage.

"Our oceans are also the lifeline of international trade. We must protect them from the race for expansion. The international community must speak in one voice to strengthen a rule-based world order,” he added.

Some states did not reduce local taxes on petrol, diesel despite Centre's excise duty cut: PM

Kolkata: CPM's youth arm DYFI on Monday said that it will hold its 11th four-day national conference from May 12, which will commence with a public meeting ..

New Delhi: The Supreme Court Monday refused to entertain a plea filed by CPM against the demolition drive by South Delhi Municipal Corporation in Shaheen ..