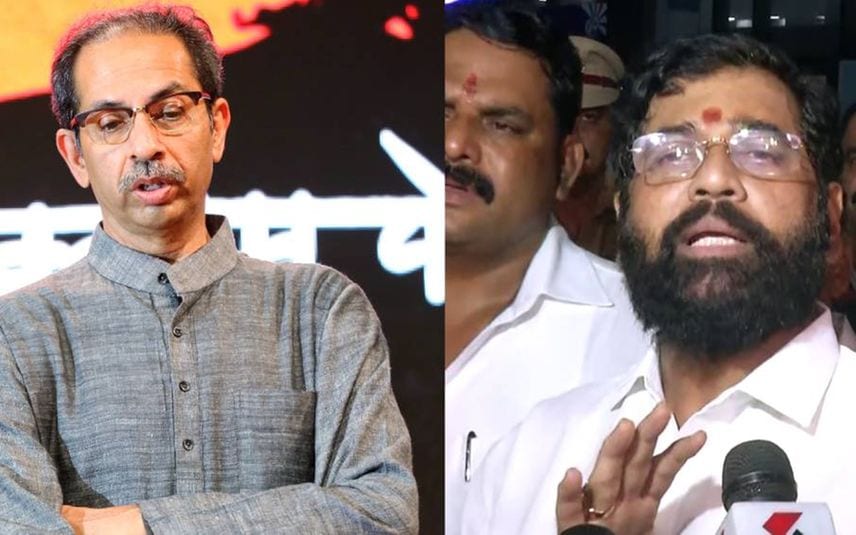 New Delhi: The Supreme Court on Tuesday allowed the Election Commission of India (ECI) to decide on rival claims made by groups led by Uddhav Thackeray and Chief Minister Eknath Shinde on which faction is the real Shiv Sena.

A five-judge Constitution bench headed by Justice DY Chandrachud declined to stay proceedings before the Election Commission on the Shinde group's claim for recognition as the 'real' Shiv Sena.

The bench also comprising Justices MR Shah, Krishna Murari, Hima Kohli and PS Narasimha rejected the plea of the Uddhav Thackeray group seeking a stay on proceedings before the EC till the Supreme Court decides on the main issue pending before it.

"We direct that there would be no stay of the proceedings before the Election Commission of India. Accordingly, the Interlocutory Application is dismissed," the bench stated in its order after a day-long hearing.

The ECI will now also look at the issue of allotment of Shiv Sena's traditional bow and arrow symbol of the party.

Earlier, the apex court had verbally asked the poll panel to not take any precipitative action on the issue.

Thackeray group had filed an application before the top court seeking direction to restrain the Election Commission from deciding the claim raised by the Shinde faction for recognition as the official Shiv Sena party.

During the hearing, Senior advocate Kapil Sibal, appearing for the Thackeray group, argued that Shinde has incurred disqualification as his various acts amount to voluntary giving up of the party membership under Paragraph 2(1)(a) of the Tenth Schedule and also he has violated the party whip.

He said that allowing the Election Commission to decide Shinde's claim can result in "irreparable damage" to the Thackeray group.

Senior advocate Abhishek Manu Singhvi also appearing for the Thackeray camp contended that "In whatever form the Shiv Sena exists today, they have no claim that they have merged with the BJP. You (Shinde group) have left the Shiv Sena, but you want the goodwill of Shiv Sena and so you won't merge."

Senior advocate Neeraj Kishan Kaul, appearing for the Shinde group, claimed that over 1.5 lakh party members had sent their representations to the Election Commission supporting the Shinde group.

Solicitor General Tushar Mehta, appearing for the Maharashtra Governor, told the bench that the Election Commission should be allowed to discharge its duties.

He said, "This is a political question and it is not the first time that such a split has happened and to decide which faction is the real party. It is the election commission which is equipped to look into this."

The top court is seized of several petitions filed by rival groups of Shiv Sena in relation to the Maharashtra political crisis.

In August, the top court's three-judge bench had referred to a five-judge Constitution bench the issues involved in the petition filed by rival groups of Shiv Sena in relation to the Maharashtra political crisis.

Earlier, the Supreme Court three-judge bench had said that some of the issues involved in the Maharashtra political crisis may require a larger Constitutional bench for consideration.

It had also asked the Speaker of the Maharashtra Legislative Assembly, Rahul Narwekar not to take any action on the new disqualification notices issued against the members of Shiv Sena. There are various petitions pending before the apex court filed by both the factions of Shiv Sena.

Thackeray camp's Sunil Prabhu had filed a plea seeking suspension from the Maharashtra Assembly of new Chief Minister Eknath Shinde and 15 rebel MLAs against whom disqualification pleas are pending.

Shinde groups challenged the disqualification notices issued by the Deputy Speaker to 16 rebel MLAs as well as the appointment of Ajay Choudhary as Shiv Sena Legislature Party leader, is also pending before the apex court.

On June 29, the top court gave a go-ahead to the floor test in the Maharashtra Assembly on June 30. Refusing to stay the Maharashtra Governor's direction to the then Chief Minister Uddhav Thackeray to prove his majority support on the floor of the House on June 30, the bench had issued notice on Prabhu's plea against floor test.

On June 27, the top court granted interim relief to Shinde and other rebel MLAs to file their reply to disqualification notices issued to them by Deputy Speaker by July 12, 5.30 pm. Earlier, Deputy Speaker had granted them time to file a reply by June 27, 5.30 pm.