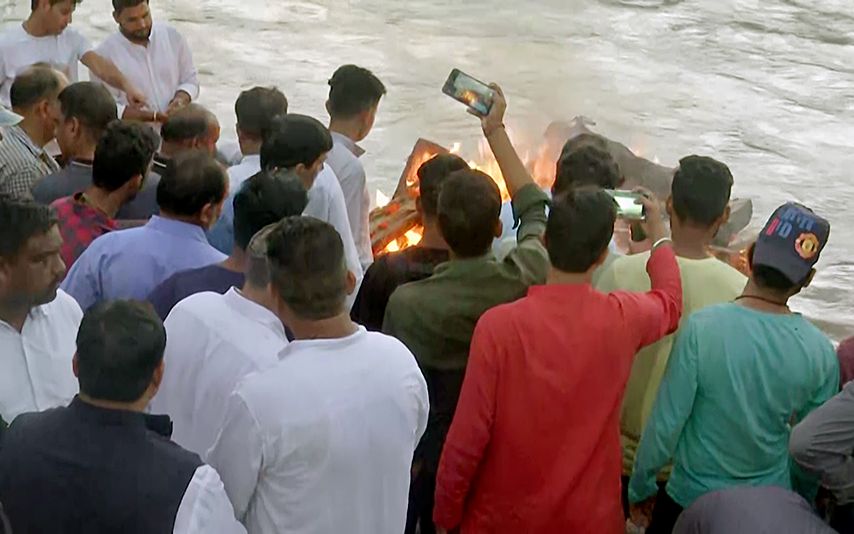 Dehradun: Relatives of the 19-year-old receptionist allegedly murdered by a BJP leader's son cremated her Sunday and protesters lifted an eight-hour blockade of a key highway after Uttarakhand Chief Minister Dhami assured justice.

Ankita Bhandari was cremated on the banks of the Alaknanda at Shrinagar around 6.30 pm in the presence of Commissioner, Garhwal, Sushil Kumar and Pauri District Magistrate Vijay Kumar Jogdande.

Her body was found in the Cheela canal close to Rishikesh on Saturday, six days after her parents found her missing from her room. She was killed allegedly by her employer.

Bhandari's family had initially refused to perform her last rites until they received the final post-mortem report. A preliminary report of an autopsy conducted at AIIMS, Rishikesh, said she died of drowning but there were antemortem injuries (injuries before death) on her body.

A message from the chief minister that the SIT was doing its job and perpetrators of the murder would get the punishment they deserve helped convince the woman's relatives to finally cremate her.

Earlier on Sunday, protesters demanding justice for Bhandari sat on a dharna on the Rishikesh-Badrinath national highway in Uttarakhand's Srinagar. The blockade lasted for nearly eight hours, leading to a nine-km-long traffic snarl.

The woman worked at the Vanantara resort in Pauri district's Yamkeshwar block owned by Haridwar BJP leader Vinod Arya's son Pulkit Arya. Pulkit and two other employees have been arrested in the case.

Violent protests had erupted in areas surrounding the resort with local people breaking glass panes and some trying to torch a pickle factory on its premises as news of the murder spread. Earlier, the administration had begun demolishing the structure, prompting critics to say that this might have destroyed some evidence.

Former Uttarakhand DGP Aloke Lal told a TV news channel that the demolition was not right as it was a scene of crime and it should have been retained as it was.

On Sunday, the SIT headed by DIG P Renuka Devi reached the resort for a forensic examination.

State DGP Ashok Kumar, meanwhile, assured the victim's family that the police would produce enough evidence in court to hang her killers.

"I have spoken to the victim's father on the phone and assured him of an impartial probe into her killing and strictest punishment to the guilty. They will not be spared at any cost," he said in a social media post.

Congress leader Priyanka Gandhi Vadra said the Uttarakhand government should act with seriousness and sensitivity in the case and demanded that the accused be tried in a fast-track court.

On Sunday, as protesters blocked the national highway in Srinagar, the police tried to have Ankita's father Virendra Singh Bhandari talk to them to lift the dharna, but it did not work.

The protesters demanded that the perpetrators of the crime be hanged immediately. A section of women at the dharna site also demanded that the accused be handed over to them so that they could be punished appropriately.

Virendra Singh Bhandari told the crowd that the police were cooperating with him and investigations were being carried out properly. The protesters, however, claimed that he was making the statement under pressure from the administration.

Additional Superintendent of Police Shekhar Chandra Suyal had appealed to the protesters as well, saying all necessary action was being taken against the accused.

Shops in Srinagar also kept shutters down in protest against the murder. Ankita Bhandari's village Shrikot is about 23 km from Srinagar. PTI