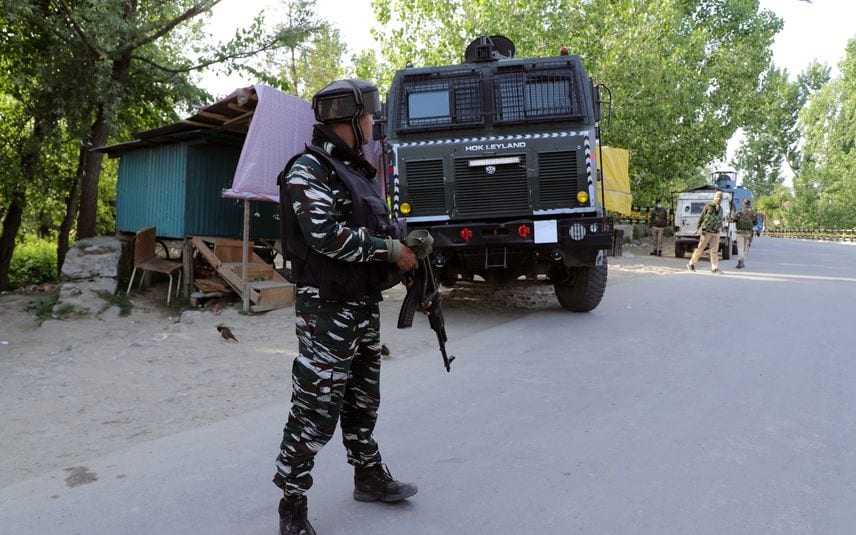 Srinagar: Two militants and a civilian were killed while two others, including a soldier, injured in separate gunfights in Jammu and Kashmir, police said on Tuesday.

Giving details, a police spokesman said a cordon and search operation was launched on Monday evening by security forces in the Pandoshan area of Shopian district following information about the presence of terrorists there.

As the search party was establishing the cordon around the area, the hiding terrorists started indiscriminate firing on it, he said.

The spokesman said the security forces exercised maximum restraint to save and evacuate the civilians present in the area.

"However, during the evacuation process, the hiding terrorists targeted the civilians as well as the security forces in a bid to escape. Although the civilians were evacuated to a safer place, due to heavy firing by terrorists, one soldier Lance Naik Sanjib Das and two civilians namely Shahid Gani Dar and Suhaib Ahmad received gunshot injuries," he said.

The injured persons were immediately airlifted to Army's 92 Base Hospital in Srinagar. However, the civilian, Shahid Gani Dar, succumbed to injuries, the spokesman said.

Taking advantage of the darkness and the civilian presence, the terrorists managed to escape from the site of the encounter but efforts are on to locate them, he said.

It has been observed in some encounters recently in Shopian, Kulgam and Anantnag districts that Pakistani terrorists start firing on civilians and security forces to escape from the cordon, Inspector General of Police, Kashmir, Vijay Kumar said.

"In some such encounters, terrorists managed to escape from cordon but we have lost precious lives of civilians and security forces. We are trying to bring some change in our tactical SOPs," he said.

A gunfight also broke out in Kreeri in the Dooru area of Anantnag district, the spokesman said.

He said in the exchange of fire, two militants were killed.

IGP Kumar said with the killing of the two ultras, an imminent threat to the Srinagar-Jammu national highway and the Amarnath Yatra has been neutralised.

"This encounter is important in 2 aspects: 1st, it is the same group of terrorists who escaped from Watnad encounter on 16/4/22 in which we lost 1 soldier. 2nd, encounter site is very close to NHW & imminent threat to NHW & #Yatra neutralised," he said on Twitter.

J-K: One terrorist killed in encounter in Kupwara's Jumagund area

Kotak Mahindra Bank joins hand with union govt for research in the fields ...