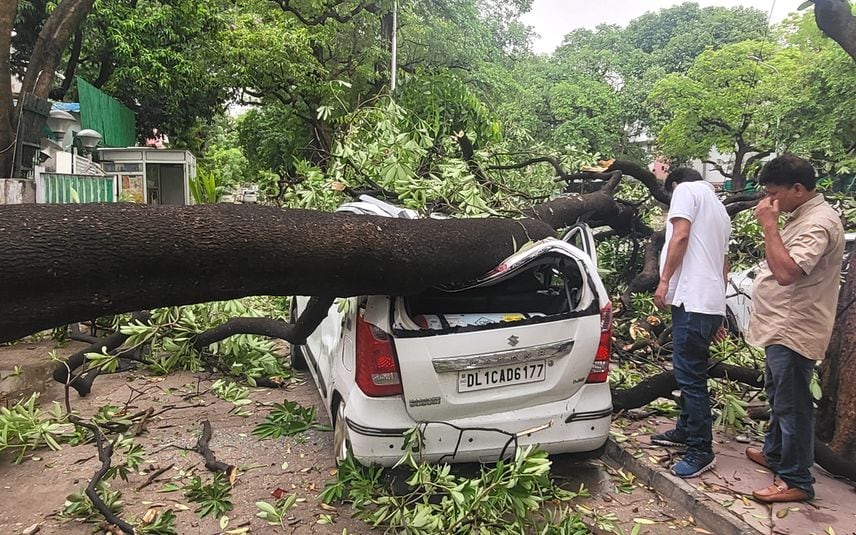 Waterlogging and power outages were also reported in some areas. Police and fire brigade personnel responded to scores of rescue calls as trees fell on vehicles and passersby and incidents of wall collapse occurred, while civic bodies were busy clearing roads.

Delhi recorded 17.8 mm of rainfall till 5.30 PM, according to the weather department.

A 50-year-old man died in the Jama Masjid area in centra Delhi after a portion of a balcony of a neighbouring house fell on him during the strong winds when he was standing outside his residence.

In the Angoori Bagh area of North Delhi, a 65-year-old homeless man identified as Basir Baba died after a Peepal tree fell on him, the police said.

In another instance, three members of a family including a one-year-old child were rescued after a Neem tree fell on a Creta car near Kabootar Market in Chandni Chowk.

The historic Jama Masjid also suffered damage as the finial of its middle dome broke. Its Shahi Imam Syed Ahmed Bukhari said two people were injured as loose stones fell from one of the minarets and other parts of the mosque.

According to police, 294 calls about fallen trees were received till 8 pm on Monday

Commuters had a difficult time as traffic snarls were reported near ITO, AIIMS flyover, and DND.

At least five flights were also diverted and 70 were delayed at the Delhi airport due to the thunderstorm, officials said.

The delayed flights included at least 40 departures, they said.

"Distressed by the sight of uprooted trees, fallen branches and waterlogging at places after the early evening storm... Instructed officials to take immediate steps to remove debris and clear the roads immediately so as to mitigate the inconvenience to people," he tweeted.

Residents posted videos of cars shaking in the gusty winds and of fallen trees. In many places, vehicles were damaged after the trees fell on them owing to strong winds and rain.

West Delhi BJP MP Parvesh Sahib Singh Verma's car was also damaged after the branches of a tree fell on the vehicle parked at his official residence at Windsor Place.

"Till 7.15 PM, a total of 101 complaints were received about uprooted trees and broken branches. Work is on to clear the areas where such incidents have been witnessed. Several areas, including Bhagwan Das Road, Connaught Place, SP Marg, have already been cleared," a senior NDMC official said.

A red Volkswagen car was damaged after a piece of metal pierced its windshield while another car was reported trapped under an uprooted tree at Connaught Place.

Several trees were also uprooted inside the Jamia Millia Islamia where the walls of a building were also damaged, officials said.

According to varsity officials, many solar panels installed in the administrative block were blown away by the winds.

The walls of Zakir Husain Memorial suffered damage due to the heavy downpour. Almost 200-300 trees would have suffered damage across the campus. The road outside the varsity campus witnessed traffic snarls.

The heavy rains and wind also damaged flags installed by the Delhi government at various locations.

Trees were also uprooted on the Bhai Vir Singh Marg in the Gole Market area near the Nepal Embassy and also near the Parliament Street police station leading to obstruction in traffic.

The Kasturba Gandhi Marg was completely closed for vehicular movement. There were also reports of poles damaging vehicles in the South Extension market while a Delhi Traffic Police booth at Vijay Chowk was damaged owing to strong winds.

The Delhi Police also assured people that their issues were being taken care of. The wind was so strong that an air conditioners fell off a building on the Parliament Street, causing damage to cars and auto-rickshaws.

Commuters had a difficult time as traffic snarls were reported near ITO, AIIMS flyover, and DND.

"Traffic is affected on MB Road (Both carriageway) due to waterlogging at Railway Underpass Pul Prahladpur. Kindly avoid the stretch," the Delhi Traffic Police said in a tweet.

Mahesh Kumar, an auto driver stuck in the heavy traffic jam on the Jai Singh Marg said, "I started from the High Court. After seeing traffic on reaching Ashoka Road where trees had fallen, I took several other routes to finally reach Jai Singh Marg but have been stuck for the last 1.30 hours. Every route I took, I saw traffic jams," said

Another commuter Vinay Yadav said he was stuck at the Jai Singh Marg for more than two hours.

"I came from Rajender Palace area and since trees have fallen, we are stuck in traffic. I need to reach home at Sarita Vihar. With this traffic, I don't think I would reach home anytime soon," Kumar said. PTI

Extensive waterlogging, traffic congestion in Delhi due to rains