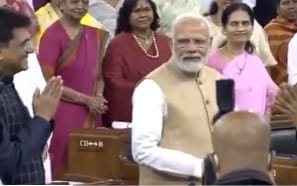 In the video shared by the two leaders, President Kovind is seen greeting the leaders, including PM Modi and Union minister Piyush Goyal sitting in the front row during the farewell function hosted by the MPs on Saturday.

Prime Minister Narendra Modi, Lok Sabha Speaker Om Birla, and Congress leader Adhir Ranjan Chowdhury were among those present on the occasion. President Kovind's tenure as President came to an end on Sunday.

Hitting out at the BJP, Gupta tweeted "Don't Disturb" attaching the clip, while Singh tweeted "Such an insult Very Sorry Sir. These people are like this, your term is over, now they will not even look at you".

Twitter marked both the tweets as "out of context" and said, "PM Modi did greet President Ram Nath Kovind in his farewell event, say fact-checkers and news reports".

The social media platform, while attaching a picture via Rashtrapati Bhavan of PM Modi greeting the President while the latter went past him, said, "On July 23, 2022, a farewell event was organized in Parliament to commemorate the end of President Ram Nath Kovind's tenure. A short clip from the event is being shared with misleading claims, according to fact-checkers. Boom Live, The Quint and other news media have reported PM Modi can be seen greeting the president in the original video footage."

Twitter marks the media "out of context" that "may deceive or confuse people and lead to harm".

"You may not share synthetic, manipulated, or out-of-context media that may deceive or confuse people and lead to harm ("misleading media"). In addition, we may label Tweets containing misleading media to help people understand their authenticity and to provide additional context," according to the Twitter website.

Meanwhile, the Bharatiya Janata Party on Sunday, while alleging that Sanjay Singh had insulted Prime Minister Narendra Modi by sharing an "edited clip" of him greeting President Ram Nath Kovind in Parliament, questioned the intention behind the act of the AAP leader.

BJP spokesperson Shehzad Poonawalla said that PM Modi had greeted President Kovind which could be seen in the complete video of the Parliament.

Addressing a press conference here, Poonawalla said, "Sanjay Singh tweeted today in which he said that the outgoing president was insulted. There could not be anything more unfortunate than this. He posted an edited clip and levels allegations against the Prime Minister at such an event on which there should not be any politics. The edited clip was shared. The Prime Minister had greeted President Kovind which could be seen in the full video. There are pictures in the public domain showing PM Modi greeting the President. Still, such an allegation was levelled. What was the intention?" (ANI)