The Indo-US ties are no longer just another partnership but have touched far greater heights, and the Trump's trip with his family shows this, Modi said. 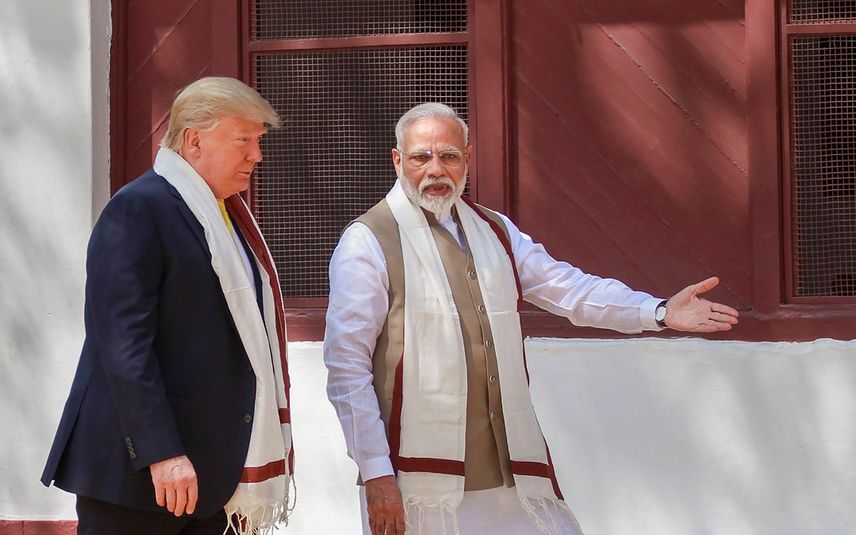 Ahmedabad: Prime Minister Narendra Modi on Monday hailed US President Donald Trump's visit to India as a "new chapter" in the historic Indo-US relations, adding their ties is no longer just another partnership but a far greater and closer relationship.

Welcoming the President at the 'Namaste Trump' event at the new-look Motera stadium shortly after his arrival on the first leg of his two-day trip, Modi said a "new history" is being created and asserted that foundations of new alignments, challenges, opportunities and changes are being laid.

"India and the US relations and cooperation will play an important role in deciding the course of world in the 21st century. I am of the categorical view that India and the US are natural partners," he told an estimated one lakh-strong audience who broke into cheers frequently.

Underscoring the strong ties between the two nations, Modi said the US is now India's largest trading partner and the Indian military is involved in its biggest war exercise with the US.

Trump's visit to India at the turn of the new decade is a big opportunity, he said.

The Indo-US ties are no longer just another partnership but have touched far greater heights, and the Trump's trip with his family shows this, Modi said.

Modi said President Trump's visit is a new chapter in the relations between India and America. "A chapter that will become a new document of progress and prosperity of the people of America and India," he added.

There is so much that the two countries share, Modi said.

He said the two countries also share spirit of enterprise and innovation, shared opportunities and challenges and shared hopes and aspirations.

The biggest strength between two people or nations is trust, Modi said while quoting an old adage that "friendship is where trust is unshakable".

In the last few years, trust between the US and India has strengthened further and has reached historic levels.

"What you have done for healthy and happy America is getting good results. What you are doing for children in society is admirable," Modi said.

"Our youth power is full of aspirations. Setting big goals, achieving them is becoming the hallmark of new India today," he said.

Modi noted that India not only has the world record of sending the maximum number of satellites simultaneously, but also is making the world record by doing the fastest financial inclusion.

"Today the country with which India has the most extensive research and development partnership is America," he said.

Some states did not reduce local taxes on petrol, diesel despite Centre's excise duty cut: PM

Srinagar: Two militants and a civilian were killed while two others, including a soldier, injured in separate gunfights in Jammu and Kashmir, police said ..

New Delhi: India on Tuesday said it is "fully supportive" of Sri Lanka's democracy, stability and economic recovery, a day after the island nation's ..