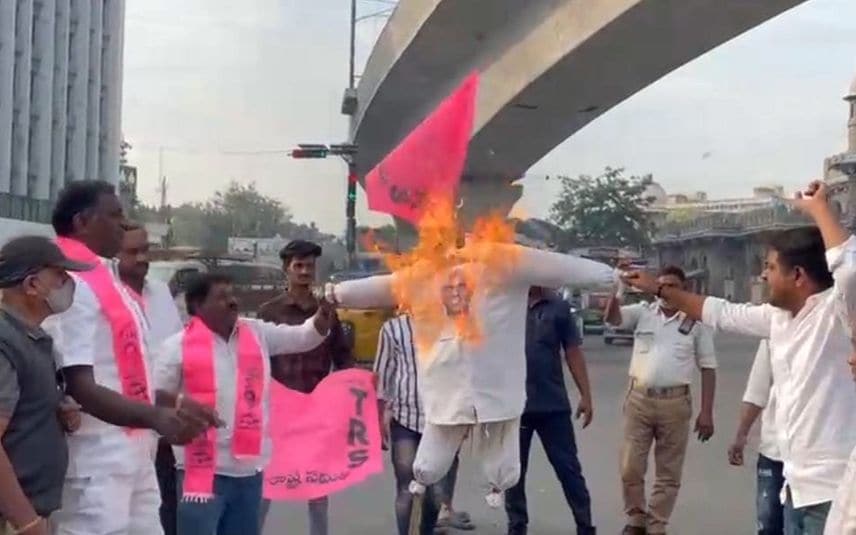 The attack took place after the BJP MP was heard in a video targeting the state's ruling party by making alleged disparaging remarks against Kavitha, also a ruling party MLC.

State Governor Tamilisai Soundararajan expressed concern over the incident and asked the DGP to submit a detailed report on the incident "on a priority basis".

"... threatening and scaring of the family members and the domestic help at the MP's residence is highly condemnable," a Raj Bhavan press communique quoted her as saying.

The residence of the Arvind, Nizamabad Lok Sabha MP, was attacked by people wearing TRS flags and scarves and they also burnt an effigy of the BJP leader, prompting the police to disperse them.

Condemning the incident, the BJP alleged it was the handiwork of ruling Telangana Rashtra Samiti (TRS). A person at the MP's residence alleged the perpetrators damaged idols and a car in the premises. A police complaint has been filed against about 50 unnamed individuals.

A police official said 8 persons have been taken into custody.

During a press conference, Arvind made some alleged disparaging comments about the CM's family based on reports in a section of media that suggested that BJP tried to lure Kavitha into its fold.

He also alleged that Kavitha had called up AICC President Mallikarjun Kharge and expressed her willingness to join the national party after she was ignored during the name change function of TRS to BRS (Bharat Rashtra Samiti).

In a tweet, Arvind said, "TRS goons attacked my residence and vandalised the house. They terrorised my mother & created ruckus.”

There was no immediate response from the TRS over the incident.

Kavitha,who lost to Arvind in the 2019 Lok Sabha polls, had earlier in the day said some friends of BJP had approached her to join the party, but she refused the "offer".

Addressing a press conference, she also hit out at Arvind, refuting his reported comments that Kavitha had called up Kharge.

Speaking to reporters Reddy said the attack by the ruling party "goons" is deplorable and the society should condemn it.

He questioned what the police were doing at the time of attack.

He said the ruling TRS party is resorting to this kind of attacks out of despair and with an insecure feeling.