The Sayunkt Kisan Morcha (SKM), which comprises various farmer organisations, had proposed a "Kisan Tractor Rally" on Republic Day. The SKM had held several rounds of meetings with the Delhi Police in connection with their tractor parade. 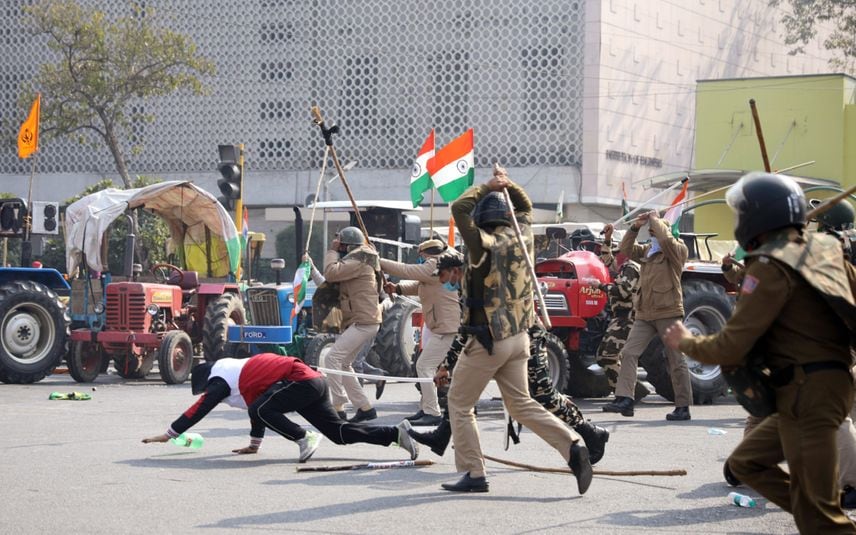 New Delhi: The Delhi Police has registered 22 FIRs so far in connection with the violence that broke out during the farmers' tractor parade in the national capital leaving over 100 policemen injured, officials said on Wednesday.

The tractor parade on Tuesday that was to highlight the demands of the farmer unions to repeal three new agri laws dissolved into anarchy on the streets of the city as tens of thousands of protesters broke through barriers, fought with police, overturned vehicles and hoisted a religious flag from the ramparts of the iconic Red Fort.

More than 100 policemen have been injured in the incident, he said.

The Sayunkt Kisan Morcha (SKM), which comprises various farmer organisations, had proposed a "Kisan Tractor Rally" on Republic Day. The SKM had held several rounds of meetings with the Delhi Police in connection with their tractor parade.

They had given an undertaking to the police to take out a peaceful rally as per the proposed plans on four agreed upon routes.

Instead of going on the pre-decided route, they insisted upon going towards central Delhi and despite repeated requests, the farmers, led by Nihangs on their horses and equipped with swords, kirpans and fursas, had charged at the police and broke through several layers of barricades, which were erected between Mukarba Chowk and Transport Nagar, the police had said.

Similar incidents were reported from Gazipur and Tikri borders.

The farmers at the Gazipur border broke through the barricades at several points and headed for ITO, where they were joined by the farmers who had come from the Singhu border.

At the Tikri border also, the farmers did not agree to the pre-decided plan and fought with police. They not only broke barricades, but also attacked police vehicles and personnel with deadly weapons. Instead of turning towards Najafgarh, they headed towards Peeragarhi and further towards the central part of the national capital, police had said.

At ITO, a large group of farmers, who had come from Gazipur and Singhu borders,had attempted to move towards Luytens' Delhi. When they were stopped by policemen, a group of these farmers became violent and broke the barricades, damaged iron grills and dividers and even tried to run over the policemen deployed at these barricades, the police had said in a statement.

However, police personnel succeeded in stopping them from entering Lutyens' Delhi. Meanwhile, some farmers also indulged in vandalism and attacked policemen. Later, they changed their plans and moved towards Red Fort, it said.

At Red Fort, they broke the gates and entered its wells. A section of the crowd also managed to climb atop the rampart of the Red Fort where they hoisted their organisation's flag, the statement had said.

Police had managed to remove the crowd from the rampart. PTI