TN should show the way to India in keeping out BJP, oust CM: Rahul Gandhi 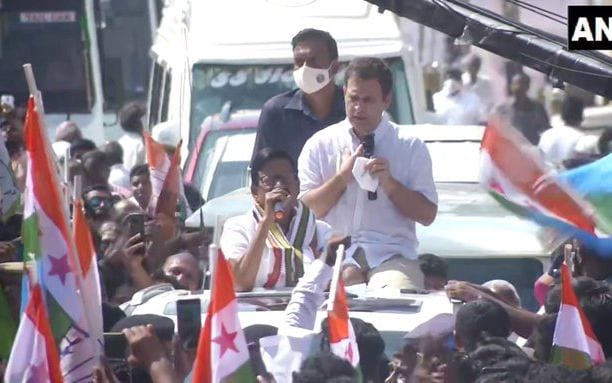 Nagercoil (TN): Tamil Nadu should show the way to India in keeping away the forces that are inimical
to language and culture and those projecting "one culture, one nation and one history" concept, Congress leader Rahul Gandhi said on Monday.

History has shown that nobody can rule Tamil Nadu other than the Tamil people, he said during a public address here as part of his three-day tour of poll-bound Tamil Nadu.

"This election will show the same thing that only a person who truly represents the Tamil people can be a chief minister of Tamil Nadu," he said addressing the huge crowd in Nagercoil, in the southern Kanyakumari district.

"Tamil Nadu chief minister (K Palaniswami) who bows to Prime Minister Narendra Modi will never be able to do this. The chief minister should bow to the people of the state," he said.

The RSS and Modi "insult Tamil language and culture", he said, adding the people should not to allow them to to gain a foothold.

Single phase elections to 234 Assembly seats in Tamil Nadu are scheduled on April 6. The Congress is fighting the elections from the DMK-led alliance.

Rahul further said "Modi talks about one culture, one nation, one history and one leader."

He accused the BJP-led government at the Centre as well as the Palaniswami government of not respecting Tamil language, culture or tradition.

"We have a chief minister here who submits to everything that Modi says. The chief minister represents what Modi wants to do but not the people of Tamil Nadu," he charged.