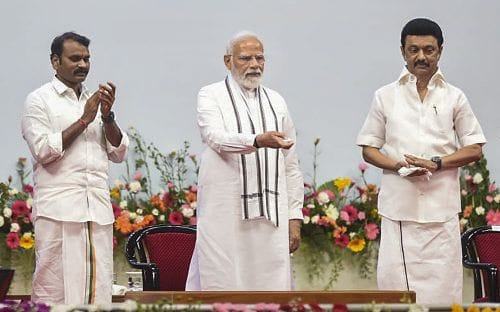 Chief Minister M K Stalin, in his address, sought a raise in funding to the state and outlined that Tamil Nadu's growth is unique as it is based not merely on economic parameters but on the 'Dravidian model' of inclusive growth.

The Prime Minister dedicated to the nation 5 projects worth over Rs 2,960 crore, in the presence of Governor R N Ravi, Union Minister L Murugan and Chief Minister M K Stalin.

The programme also witnessed inauguration of 1,152 houses constructed as part of the Light House Project-Chennai, built at a cost of Rs 116 crore under Pradhan Mantri Awas Yojana-Urban.

Chief Minister M K Stalin said such infrastructure projects are important for the growth of Tamil Nadu and the state is already a pioneer in the country across several sectors. Stalin said Tamil Nadu's growth trajectory is unique as it is not only about economic growth, but its about all inclusive growth driven by social justice and equality, which is the 'Dravidian model'. Emphasising on cooperative federalism, Stalin demanded that the Central government enhance funding for Tamil Nadu projects.

As part of kickstarting the scheme, allotment of houses were given to some beneficiaries on the occasion by the dignitaries. Prime Minister also laid the foundation stone of 6 projects, worth over Rs 28,000 crore. The 262 km long Bengaluru-Chennai Expressway would be built at a cost of over Rs 14,870 crore. It would pass through the states of Karnataka, Andhra Pradesh and Tamil Nadu and help reduce travel time between Bengaluru and Chennai by 2-3 hours.

The 4 lane double decker elevated road connecting Chennai Port to Maduravoyal (NH-4), of about 21 km would be built at a cost of over Rs 5,850 crore ensuring round the clock movement of cargo vehicles to Chennai port.

The 94 km long 4 lane Neraluru to Dharmapuri section of NH-844 and 31 km long 2-lane with paved shoulders of Meensurutti to Chidambaram section of NH-227, at a cost of around Rs 3870 crore and Rs 720 crore respectively, would help provide seamless connectivity in the region.

The PM also laid the foundation stone of a Multi Modal Logistic Park at Chennai worth around Rs 1430 crore. It would provide seamless intermodal freight movement and also offer multiple functionalities.

Quoting a couplet from Tamil classic Tirukkural, Union Minister L Murugan hailed Modi as a leader who has fulfilled his assurances perfectly in sync with the promises made.

The Tamil Nadu BJP gave a rousing reception to Modi, who is on his maiden visit to the state after the ruling DMK government assumed office in May 2021.