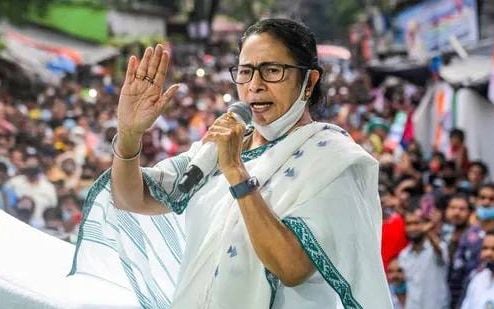 “Is this ‘Ram rajya’? No, this is ‘killing rajya’,” news agency ANI quoted Mamata Banerjee as saying | Photo: PTI

Addressing party workers in Panaji, Banerjee said, "TMC means 'Temple-Mosque-Church'. We fight the BJP. Is there a chance of winning? Do you have the confidence that we can win? If you are confident, then do not step back. March ahead,"

"We are not here to cause vote-splitting but to unite the votes and make the TMC alliance win. This is BJP's alternative. If someone wants to support it, it is up to them to make a decision. We have already made a decision. We will fight and die but we will not step back," she added.

Mamata Banerjee is on a three-day tour to goa. Earlier today, she held a meeting with leaders of the TMC's Goa unit.

The TMC aggressively started campaigning for the upcoming polls after former Goa Chief Minister Luizinho Faleiro joined the party. Faleiro joined TMC in the presence of Abhishek Banerjee after resigning from the Congress party.

Goa is scheduled to go for the Assembly polls in early 2022.

Goa Assembly has a strength of 40 members out of which BJP currently has 17 legislators and enjoys the support of legislators from Maharashtrawadi Gomantak Party (MGP), Vijay Sardesai of the Goa Forward Party (GFP) and three independents. GFP and MGP each have three MLAs.Congress, on the other hand, has 15 MLAs in the house. (ANI)