Tharoor calls PM 'man of tremendous vigour and dynamism', credits BJP's victory in UP polls to him

Congress leader Shashi Tharoor at an event on Sunday said regarding the Uttar Pradesh Assembly elections that one day, the Indian voter will surprise the Bharatiya Janata Party (BJP), but today the people have given them (BJP) what they wanted. 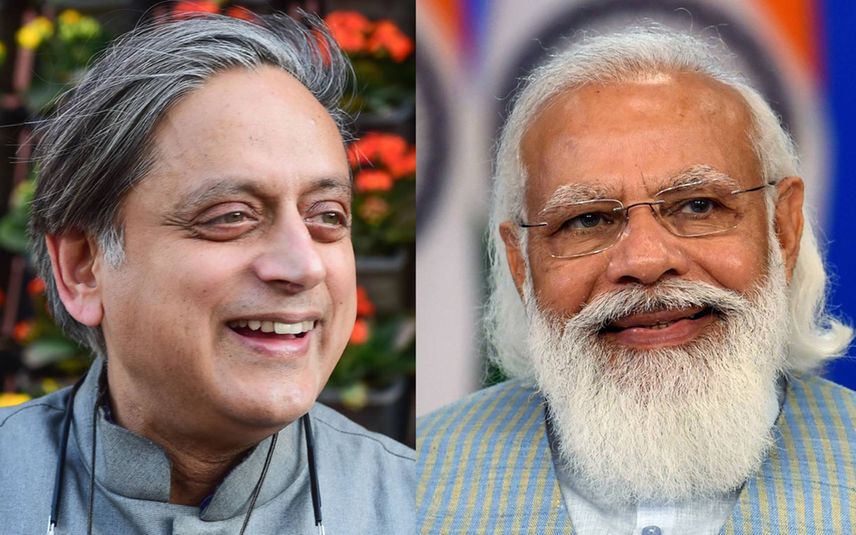 Jaipur (Rajasthan) : Congress leader Shashi Tharoor on Sunday lauded Prime Minister Narendra Modi calling him 'a man of tremendous vigour and dynamism' and gave credit to him for the BJP's victory in the recently concluded Uttar Pradesh Assembly elections.

"Prime Minister Narendra Modi is a man of tremendous vigour and dynamism and has done some things which are very impressive, especially politically. We did not expect him to win with such great margins but he did," said Tharoor while interacting with the media at the Jaipur Literature Festival.

Congress leader Shashi Tharoor at an event on Sunday said regarding the Uttar Pradesh Assembly elections that one day, the Indian voter will surprise the Bharatiya Janata Party (BJP), but today the people have given them (BJP) what they wanted.

after the words of praise for the Prime minister, the Congress leader, however, also criticized him and said, "He has unleashed such forces in the society that are dividing our nation on communal and religious grounds which according to me is introducing a toxin that is unfortunate."

Tharoor further said that he was surprised over the political analysts describing the UP poll results as a "foregone conclusion", and said that very few predicted BJP's victory until the exit polls came out.

"Until the exit polls came out there was no question in my mind that most of the people were expecting a very, very close fight, and some were saying anecdotally that Samajwadi Party was ahead," he said.

The Congress leader said, "The Indian voter has the capacity to surprise, and one day, they will also surprise the BJP. But right now they have given the BJP what they wanted."

"Many people had not expected that BJP will come in power once again with such a majority. Samajwadi Party's (SP) seats have increased and hence they will prove to be a good opposition," added the Congress leader.

On Congress' performance in the UP Assembly elections he said that Priyanka Gandhi Vadra did remarkable and energetic campaigning for the party, and "from my point of view, I don't think that the Congress per se can be faulted on the grounds of one person's campaigning."

"I think the issues are rather larger for the party as well as for party viability in some states where our presence has been systematically going down over the last 30 years," he said.

"You would have seen her everywhere, including getting arrested a couple of times by the Uttar Pradesh Police. You have seen her very much on the spot and running through the state," said the Congress leader.

Tharoor was in Jaipur on Sunday to take part in the Jaipur Literature Festival 2022.

The 15th edition of Jaipur Literature Festival 2022 is taking place from March 5 to March 14 in a hybrid format with its on-ground events from March 10 to March 14 at Clarks Amer, Jaipur, Rajasthan. (ANI)