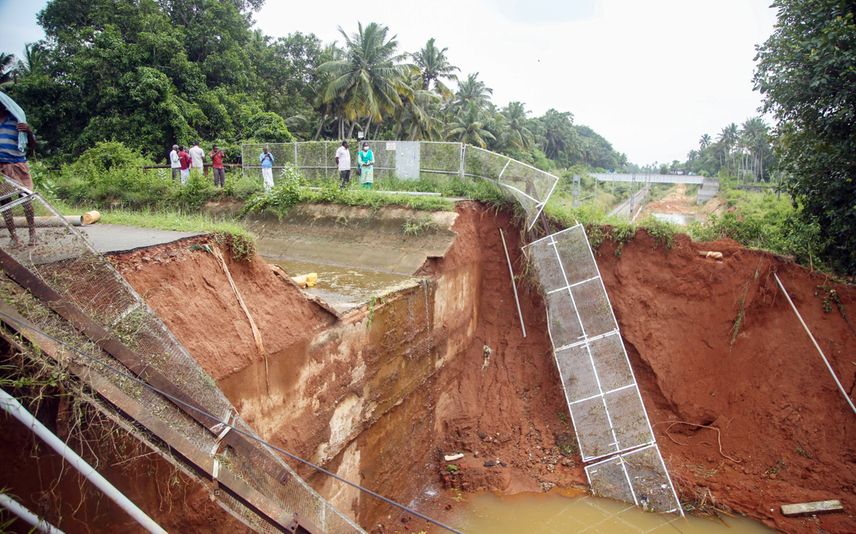 A damaged area after floods due to heavy rain in Kanyakumari district | Photo: PTI

Chennai: The depression over Bay of Bengal crossed the coast between Tamil Nadu and Andhra Pradesh early on Friday, the India Meteorological Department (IMD) said and announced that the weather system will gradually weaken. It forecast more rains for the state and heavy to very heavy rainfall in parts of AP and Karnataka.

Meanwhile, there was a let-up in rainfall in northern districts of Tamil Nadu and neighbouring Puducherry, especially on Friday morning, even as the IMD said the depression will gradually weaken into a well marked low pressure in the next 12 hours.

Following heavy rains in Andhra Pradesh and resultant high flow of water between Tada and Sullurpetta, the Southern Railway announced cancellation-both full and partial - of various trains, besides diverting some others.

It lay centred at 5.30 AM as of Friday over north coastal Tamil Nadu and neighbourhood and about 60 km south-southwest of Chennai and 60 km north-northeast of Puducherry.

"It is very likely to continue to move west-northwestwards and weaken gradually into a Well Marked Low Pressure Area during next 12 hours," it said.

It added squally wind speed reaching 45-55 kmph gusting to 65 kmph was likely to prevail over southwest and adjoining west-central Bay of Bengal and along and off Tamil Nadu, Puducherry and adjoining south Andhra Pradesh coasts during next six hours and decrease gradually thereafter.

Meanwhile, the Southern Railway announced cancelling many services, following "heavy rain and consequent water level flowing at danger level at Bridge No.167 between Tada and Sulurupetta Stations (in AP)."

Services to and from Tirupati, which was caught in a massive flood on Thursday, from here are among the cancelled ones while the Railways also announced diversion of trains including the Hazrat Niazmuddin-bound Rajdhani Express.

Meanwhile, schools remained closed in many districts in Tamil Nadu, including Chennai and its nearby ones, and those in the neighbouring Puducherry union territory on Friday. PTI