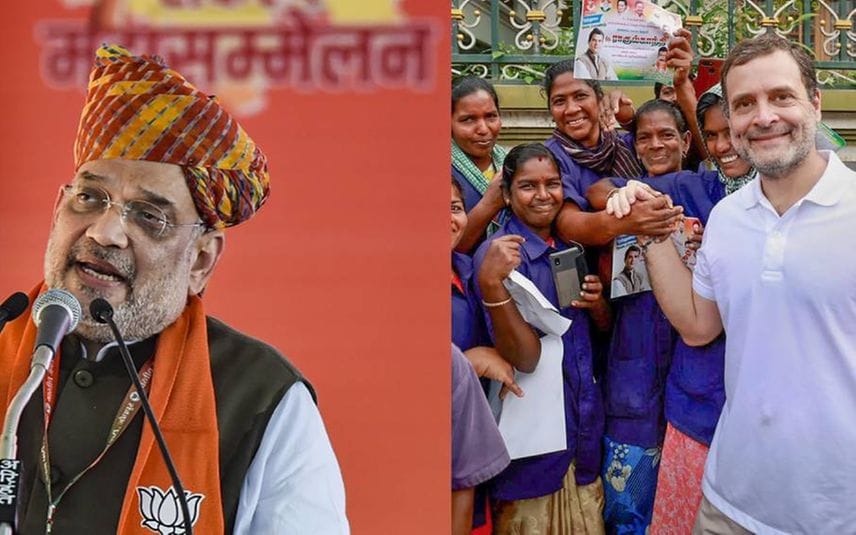 Jodhpur: Union Home Minister Amit Shah on Saturday, took a swipe at Rahul Gandhi, saying that the Congress leader is leading a campaign to unite the nation- the Bharat Jodo Yatra "wearing a foreign t-shirt".

The BJP on Friday attacked the Congress on social media, claiming that Rahul Gandhi, who has been raising the issue of inflation during the 'Bharat Jodo Yatra', was himself wearing a T-shirt worth Rs 41,257 and that too of a foreign brand when Prime Minister Narendra Modi has been leading the mission of 'make-in India'.

Reminding Gandhi of his speech in the Parliament where he said that "India is not a nation", Shah said that lakhs of people have sacrificed their lives for this country, and asked the Congress leader to "study India's history".

"Rahul Gandhi has set out with Bharat Jodo Yatra wearing foreign t-shirt. I am reminding a speech by Rahul Gandhi and Congressmen in his Parliament. Rahul Baba had said that India is not a nation. Rahul Gandhi, in which book have you read this? This is the nation for which lakhs and lakhs of people have sacrificed their lives. Rahul Gandhi needs to study India's history," Shah said while addressing the Booth President Sankalp Mahasammelan in Jodhpur.

The Home Minister further hit out at Chief Minister Ashok Gehlot over the "highest prices" of fuel in the state and said that his government did not reduce the taxes on petrol and diesel despite the Centre slashing the tax rates on them.

Shah urged the people to "uproot the Gehlot government" and said that the BJP government will reduce the taxes as well as the price of electricity.

Shah also targeted the law and order situation in the state and recalled the brutal murder of tailor Kanhaiya Lal who was hacked to death in Udaipur earlier this year.

"The Congress had done the pre-planned riots of, Jodhpur, Chittoor, Nohar, Malpura and Jaipur. I want to tell Ashok Gehlot that if you can't handle, then step down, people of Rajasthan are ready to bring the BJP. The cases against women have increased by 56 per cent. A woman teacher was set ablaze alive in Jaipur. Gau Mata is also not safe here. PM Modi approved 23 medical colleges in Rajasthan," the Home Minister added launching a scathing attack on Gehlot.

Shah urged the people to vote the BJP to power in the 2023 Assembly elections which would pave the way to the party's victory on all the seats in the state in the 2024 general elections in the state.

The Home Minister laid the foundation stone of the project as part of his two-day visit to Rajasthan. He reached Jaisalmer on Friday evening.