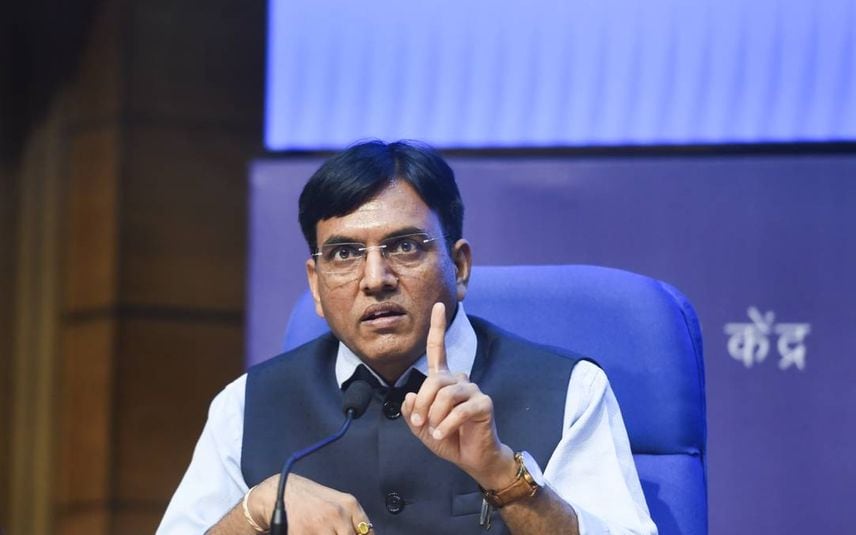 New Delhi: Union Health Minister Mansukh Mandaviya on Sunday said states and union territories should take necessary measures, including setting up separate vaccination centres, to avoid mixing-up of Covid vaccines during administration of shots to those in the 15-18 age group.

Inoculation of children in this age category will start on January 3.

The vaccine option for those in the 15-18 age group would only be Covaxin, according to a set of new guidelines issued by the Union health ministry. Besides Covaxin, the adult population of the country is being administered Covishield and Sputnik V.

To ensure smooth implementation of the guidelines, Mandaviya held an online interaction with health ministers and principal secretaries and additional chief secretaries for health of states and union territories (UTs).

He advised them to ensure orientation of vaccinators and vaccination team members for the inoculation exercise for those in the 15-18 age group and for identification of dedicated vaccination session sites for this category of beneficiaries, a health ministry statement said.

States and UTs were advised to share their requirement of vaccine doses by giving district-wise estimation of beneficiaries, using Co-WIN, and plan for distribution of Covaxin to identified session sites well in advance, the statement said.

Mandaviya reviewed the public health preparedness for COVID-19 and progress of the national vaccination campaign in view of rising cases of the Omicron variant.

The statement said that he also reviewed the recent decisions to roll-out vaccination for the 15-18 age group and "precautionary dose" (third dose) for identified vulnerable categories.

The minister noted that at the outset, countries are experiencing three to four times surge in Covid cases in comparison to their earlier peaks.

The Omicron variant being highly transmissible, a high surge could overwhelm the medical system, Mandaviya noted.

He advised states to leave no stone unturned in ramping up infrastructure to manage a high surge so that India escapes unscathed from this episode of the pandemic, the statement stated.

Mandaviya said in this regard, irrespective of Covid variants, measures for preparedness and protection remain the same.

He urged states and UTs to re-invigorate their teams to work at the ground level and strengthen monitoring and containment mechanisms.

In the meeting, a detailed discussion on various aspects of Covid management, including ramping up hospital infrastructure, increasing testing, stringent restrictive measures for breaking the chain of transmission, and stress on Covid-appropriate behaviour, was held, the statement said.

Applauding the dedication shown by states in their fight against the pandemic and in simultaneously ensuring welfare of people, Mandaviya said, "We have put up a strong fight against Covid earlier and this learning must be used to re-focus on efforts against the Omicron variant."

He stressed on the continued need to follow Covid-appropriate behaviour along with renewed and stringent focus on containment measures for addressing the present surge, the statement said.

Underscoring the importance of vaccination, the minister observed, "We must focus on planning with regard to the 15-18 age group's vaccination and precautionary doses for eligible beneficiaries."

He also urged states to ensure that healthcare and frontline workers are fully vaccinated as they form the vulnerable categories.

While appreciating efforts of states and UTs in achieving a national average of 90 per cent coverage of first dose vaccination of all eligible adults, he urged those states, whose progress is below the average, to ramp up their vaccination campaign.

States were also advised to prepare a weekly plan to catch up and exceed the average national vaccination coverage and review implementation of the plan on a daily basis, the statement said

Stress on the vaccination drive was especially on Punjab, Goa, Uttarakhand, Uttar Pradesh and Manipur where assembly polls will be held, it said

Mandaviya also pointed out that various measures are being taken by the Union government to ramp up infrastructure and vaccine production.

He requested states and UTs to share their best practices so that the entire country can benefit.

The minister pointed out that collectively, states and UTs have only used just over 17 per cent of the available approved funds under the Emergency COVID Response Package (ECRP-II), the statement said.

States and UTs were exhorted to expedite the physical progress under ECRP-II in terms of ICU beds, oxygen beds, paediatric ICU and HDU beds etc.

They were also asked to effectively use information technology tools for tele-medicine and tele-consultation, including training and capacity building of human resources, timely availability of ambulances, readiness of states to operationalise Covid facilities for institutional quarantining, and effective and supervised monitoring of those in home isolation.

At the same time, he also urged states and UTs to better utilise approved funds under ECRP-II and invited any suggestions regarding the same, the statement said.