Scuffle between Kashmiri students, those from UP, Bihar at Punjab institute after India-Pak match 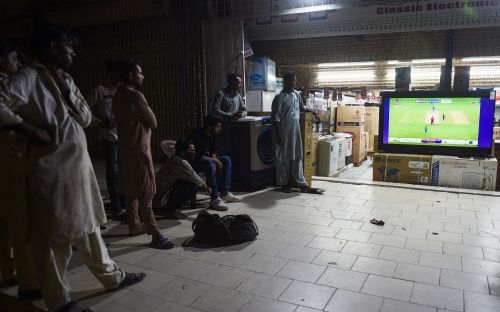 Chandigarh: A scuffle broke out between a group of Kashmiri students and those from Uttar Pradesh and Bihar at an engineering institute in Punjab's Sangrur district following the T20 World Cup match between India and Pakistan, police said on Monday.

National Conference (NC) leader Omar Abdullah said he was distressed to hear about the alleged physical assault of some Kashmiri students and urged Punjab Chief Minister Charanjit Singh Channi to look into the matter.

The incident took place after some slogans were raised after the match on Sunday night, police said.

The Kashmiri students and the students from Uttar Pradesh and Bihar were watching the match on television in their respective rooms at the Bhai Gurdas Institute of Engineering and Technology in Sangrur.

The Kashmiri students allegedly cheered for Pakistan and raised some slogans, which did not go well with the students from Uttar Pradesh and Bihar.

Heated exchanges took place between the two sides after the match, which was won by Pakistan.

A video clip surfaced on social media platforms purportedly showing a Kashmiri student alleging that some students from Uttar Pradesh barged into their room and assaulted them.

"We were watching the match and some students from Uttar Pradesh forcibly came inside. We are here to study. We are also Indians," the student said while showing the damage to his room.

He also alleged that the security guards allowed the students from Uttar Pradesh and Bihar to barge into their room.

Police later said the issue has been resolved between both sides and they have tendered apologies. No complaint has been filed in the matter, they added.

In a tweet, former Jammu and Kashmir chief minister Abdullah said, "It is distressing to hear about the incidents of physical & verbal assault against some Kashmiri students in a college in Punjab last night. I request @CHARANJITCHANNI ji to direct @PunjabPoliceInd to look in to this & also to reassure the students studying in Punjab."

Jammu and Kashmir Students' Association spokesperson Nasir Khuehami urged the Punjab chief minister to take action in the matter and ensure security to the Kashmiris studying and working in the state.

He alleged that the Kashmiri students were thrashed by the students from Bihar and Uttar Pradesh. Their rooms were vandalised and belongings damaged, Khuehami alleged in a statement.

Meanwhile, some members of the Punjab Youth Congress met the Kashmiri students.

"Important to give them a shoulder and assurance of safety, our DYC president Gobinder and DYC Incharge Deep Tiwana on direction of @IYCPunjab president @brinderdhillon met them and assured them of all support as this is very much their home, even if away from native place," the Punjab Youth Congress said in a tweet. PTI

SCUFFLE BETWEEN KASHMIRI AND UP STUDENTS