The Delhi government imposed night curfew from 11 pm to 6 am on December 31 and January 1 to avoid large gatherings due to COVID-19 and its highly transmissible UK strain. 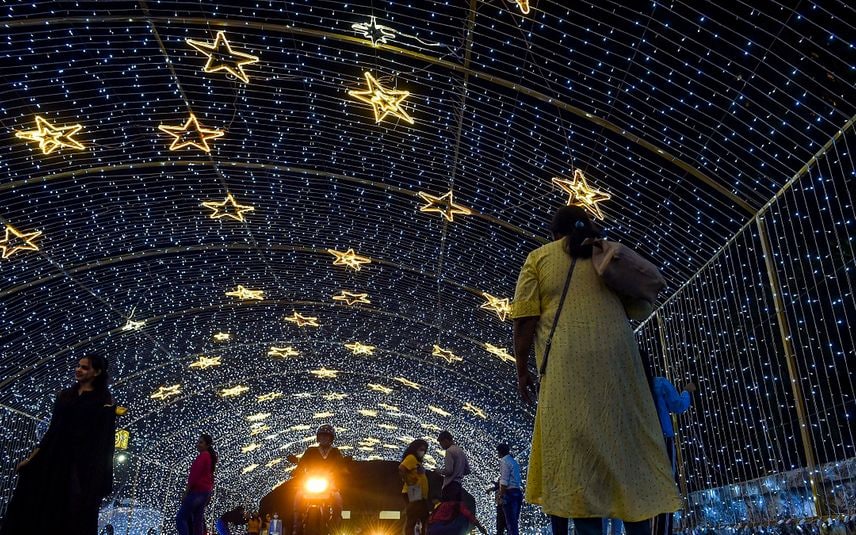 New Delhi: The COVID-19 pandemic cast a dark shadow over New Year's eve celebrations on Thursday as night curfew was imposed in several cities, including Delhi, Mumbai and Bengaluru, with many people preferring to stay in their homes on the occasion.

The Delhi government imposed night curfew from 11 pm to 6 am on December 31 and January 1 to avoid large gatherings due to COVID-19 and its highly transmissible UK strain.

It stated that not more than five people will be allowed to assemble at public places in Delhi during night curfew to avoid large gatherings in view of COVID-19.

However, there will be no restriction on interstate and intrastate movement of people and goods during night curfew in Delhi, the chief secretary said in the order.

The Ministry of Home Affairs in its advisory on December 28 had advised states and Union Territories that they can impose local restrictions, including night curfew, based on their assessment of the situation to contain the spread of COVID-19.

While those in the hospitality industry scurried to understand the fine print of the Delhi government's decision and what it would mean for establishments that had accepted bookings and were in all readiness for a New Year bash, some party goers cancelled their plans and others hastily tweaked them. For many others, it was going to be an at-home New Year's Eve anyway.

Several establishments, hoping for a turnaround after almost 10 months of little or no business, said they told people the restrictions imposed were for "public places" -- which includes parks, atriums or any open space -- and not "licensed premises". But confusion persisted and many customers, anxious to avoid trouble and nervous about getting caught on their way back home, cancelled anyway.

Delhi Police PRO Eish Singhal said, "Licensed premises have been exempted from this, they can continue to operate with their license condition, including half the seating capacity and other COVID-19 protocols."

No gatherings will be allowed in open public places like Connaught Place and India Gate during the night curfew.

The Maharashtra government has put in place a night curfew between 11 pm and 6 am, prohibiting gathering of five or more persons in view of the COVID-19 pandemic.

"Gatherings of more than five persons are not allowed at public places. Party will not be allowed at any hotel, bar, pubs, restaurants after 11 pm," Mumbai police spokesperson DCP S Chaitanya said.

Besides, no boat party or terrace party will be allowed in the city after the prescribed time, Chaitanya said, adding that strong action will be taken against the violators of prohibitory order issued under section 144 of the CrPC.

Around 35,000 police personnel will be deployed on the streets of Mumbai to maintain law and order and prevent any untoward incidents on New Year's Eve, the official said.

"Apart from the police, personnel of the State Reserve Police Force (SRPF) and home guards will also be engaged in maintaining law and order in the city," he said, adding that special branches like the crime branch and Anti Narcotics Cell (ANC) will also on the job.

Large gatherings will not be allowed anywhere in Mumbai in view of COVID-19 and use of face masks and social distancing norm will remain mandatory, he said.

The new year festivities in Bengaluru will be lacklustre this year following the prohibitory orders imposed by the city police.

Chennai will also see virtually no public celebrations as the government has already banned such festivities in restaurants, hotels, clubs and resorts, including beach resorts, on Thursday and Friday.

The Bengaluru police have imposed prohibitory orders under section 144 of the CrPC from 6 pm on Thursday to 6 am Friday.

The city is known for its grand gala celebrations during the New Year and the major hub of activities used to be MG Road, Church Street, Brigade Road, Koramangala and Indiranagar.

Now, according to the order passed by the Bengaluru Police Commissioner Kamal Pant, these places are "No-Man Zones."

To prevent the unnecessary travelling in the night, the police closed major flyovers for traffic. Major signals and junctions have also been barricaded to regulate traffic across the city.

In Chennai, the popular Marina beach which is a famed destination of new year revellers is out of bounds for any kind of celebrations and police have banned entry for the people.

The Odisha government has imposed a night curfew from 10 pm to avoid large gatherings during the New Year celebrations.

The restriction will remain in place till 5 am on Friday, Special Relief Commissioner (SRC) P K Jena said.

Bhubaneswar-Cuttack Police Commissioner S S Sarangi said 40 platoons of security personnel will be deployed in the two cities to enforce the curfew on Thursday night.

"We have information about functions that have been planned at several apartments and residential areas to celebrate the new year. We urge people not to organise such events. Police personnel will conduct surprise raids," he said.

The state government has already banned the New Year celebrations in hotels, restaurants, clubs, parks and other public places on Thursday and Friday.