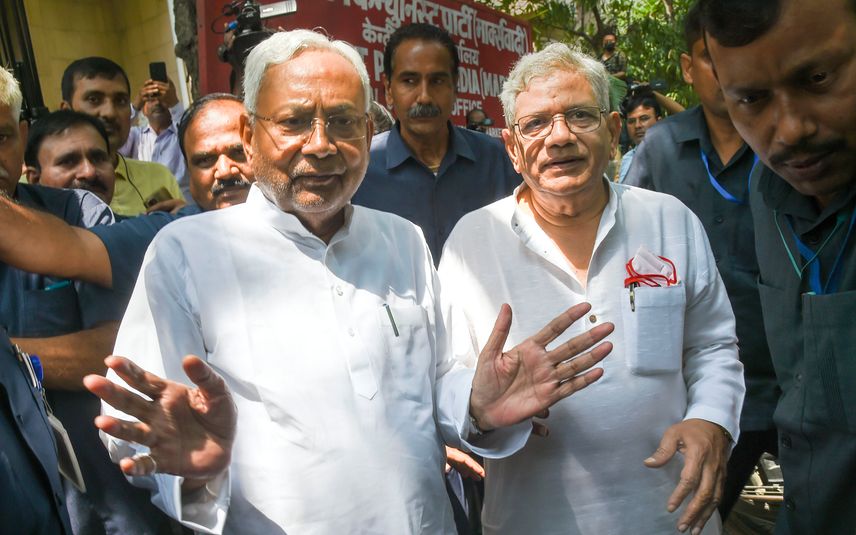 New Delhi: There is a strong possibility of opposition parties coming together to fight the 2024 Lok Sabha polls, Bihar Chief Minister Nitish Kumar said on Monday, stressing that he has had good talks with them and many will join hands gradually.

Speaking to reporters, the Janata Dal (United) leader also made light of the BJP's repeated swipe at the Opposition over its unity talks, saying the ruling party has many problems of its own. "All they can do is speak day and night," he said.

"Many parties will join hands gradually and there is a strong possibility that they can fight the 2024 polls together," he said, adding that he has had good talks with leaders of different parties.

Asked if the Trinamool Congress and the Aam Aadmi Party, both having strong reservations against the Congress, will also be a part of such a formation, he said once an agreement is reached in the Opposition about an alliance, only then something concrete can be said.

At the same time, he added that the media will be aware of all the leaders he has met.

Kumar had met AAP leader and Delhi Chief Minister Arvind Kejriwal during his last visit to the national capital.

TMC supremo and West Bengal Chief Minister Mamata Banerjee had also said recently that she together with Kumar, RJD's Tejashwi Yadav and SP supremo Akhilesh Yadav will defeat the BJP.

During an earlier visit, he had met many other opposition leaders.

Nitish Kumar, NCP leader Sharad Pawar and other prominent opposition leaders had at a rally in Fatehabad on Sunday called for a new alliance that includes the Congress for the 2024 Lok Sabha polls, stressing that a bipolar contest will ensure the BJP's defeat.

CPM forms committees on account of Lok Sabha election, each member to get charge of 10 houses

Nitish Kumar, Hemant Soren, me and other leaders will come together in 2024 LS election: Mamata

'Main front' of all non-BJP parties needed, leadership can be decided later: Nitish