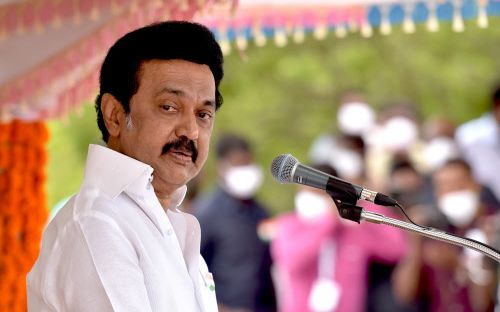 Chennai: Tamil Nadu Chief Minister M.K. Stalin on Saturday announced the "birth date" of Tamil Nadu would be marked on July 18, instead of November 1 as existing.

AIADMK Coordinator O Panneerselvam said a child's birthday falls on the day it is born and not when it is given a name, referring to the ruling DMK's decision to alter the state's formation day in lines with it getting the present name, i.e. Tamil Nadu.

In response, PMK founder S. Ramadoss said the naming day cannot be the birthday and logically only November 1 can be the Tamil Nadu day.

In a statement issued here, Stalin said it was on November 1, 1956 that states were bifurcated on linguistic basis and as a result, the then Madras Presidency was divided into Andhra Pradesh, Karnataka, and Kerala.

It was on July 18, 1967, during the Chief Ministership of C.N. Annadurai, that a resolution was passed in the Assembly for renaming Madras Presidency to Tamil Nadu, he said. It became a reality two years later, after the proposal went through the Parliament and the then central government issuing a notification on the name change in 1968, saying it would come into effect from January 14, 1969.

On his part, Ramadoss said that it was 11 years after the states were reorganised, that a resolution for renaming the state was passed in the Assembly and it came into effect only on January 14, 1969.

Birthdays can be celebrated only on the date of birth and not on the naming day or on the day on which a name was proposed, he said.

Ramadoss said all the other states that were carved out of Tamil Nadu are celebrating November 1 as their birthday.

He also pointed out that Stalin had extended his greetings on November 1, 2019 when the AIADMK government decided to celebrate that day as Tamil Nadu Day.

It was also a DMK government led by M. Karunanidhi declared January 14 as the Tamil New Year Day in 2008.

Traditionally the Tamil New Year was celebrated on the first day of Tamil month 'Chithirai' (April 14) in Tamil Nadu, Puducherry and in countries like Sri Lanka, Malaysia, Singapore, Reunion, Mauritius and other countries with a Tamil diaspora.

When the AIADMK led by J.Jayalalithaa came back to power, the Tamil New Year celebration date was reverted to April 14.

A building is also assumed to have been established on the day it is inaugurated and not when it was cleared at a proposal level, he added.

"Similarly, the birthday of the child called Madras state which was born on November 1, 1956 with the present landscape, which was decided to be renamed as Tamil Nadu in 1967 and one which happened in 1969, is still Novmber 1, 1956."

"So the announcement on celebrating Tamil Nadu on July 18 will not be suitable by any means. It amounts to saying the state was born 11 years later than it did and is an attempt at rewriting history.... is the peak of political vendetta," he added.