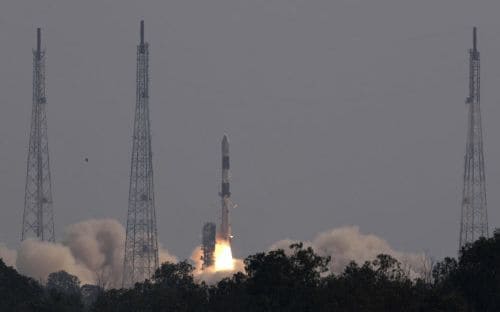 Sriharikota: ISRO Chairman S Somanath on Sunday informed the space agency's maiden Small Satellite Launch Vehicle (SSLV) suffered "data loss" at the terminal stage, although three stages "performed and separated," and said the space agency was analysing the data to ascertain the status of the vehicle and the satellites.

SSLV-D1/EOS 02 was carrying an earth observation satellite and a student satellite.

A jubilant mood in the Mission Control Centre soon made way to anxiety, before Somanath updated about the mission status.

The Indian Space Research Organisation (ISRO) embarked on its maiden small satellite launch vehicle (SSLV) mission, carrying earth observation satellite EOS-02 and co-passenger students satellite AzaadiSAT on Sunday. The SSLV-D1/EOS-02 mission by the Indian space agency is aimed at garnering a larger pie in the small launch vehicles market, as it can place the satellites into Low Earth Orbit.

At the end of a seven and a half hour countdown, the 34 metre long SSLV soared majestically at 9.18 am amid cloudy skies to place the satellites into the intended orbit.

The AzaadiSAT is a 8U Cubesat weighing around 8kgs. It carries 75 different payloads each weighing around 50grams. Girl students from rural regions across the country were provided guidance to build these payloads.