An agitated Banerjee slammed the Election Commission for not taking any action despite lodging several complaints and threatened to move court over it. Amongst the complaints were allegations of "booth capturing" and massive fake voting in Boyal. 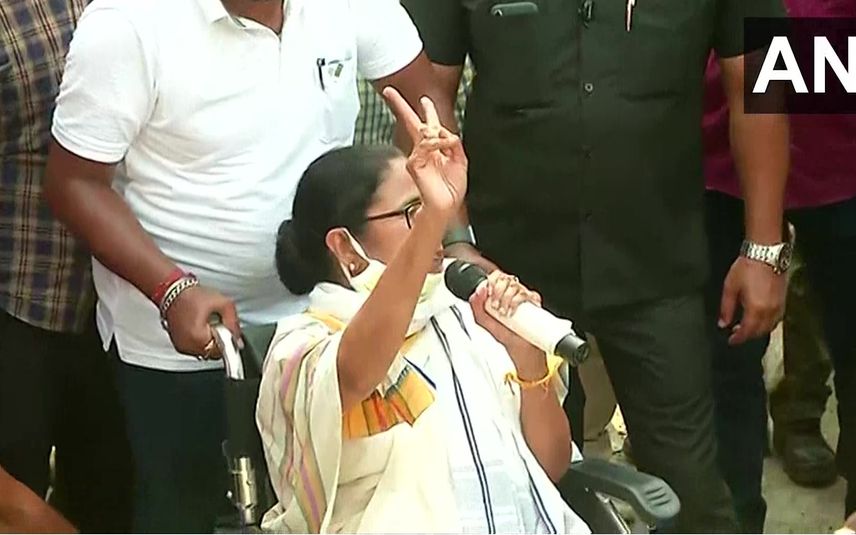 Nandigram/ Kolkata: Heavy voting amidst sporadic violence, marked the second phase of polling to the West Bengal assembly, as Chief Minister Mamata Banerjee slammed the Election Commission over inaction to complaints filed by her party.

Sporadic violence and minor clashes were reported from various constituencies, including the high profile Nandigram, where chief minister Mamata Banerjee is locked in a high- stakes electoral battle with her former lieutenant Suvendu Adhikari now with the BJP.

An agitated Banerjee slammed the Election Commission for not taking any action despite lodging several complaints and threatened to move court over it. Amongst the complaints were allegations of "booth capturing" and massive fake voting in Boyal.

"We have lodged 63 complaints since morning. But not a single action has been taken. We will move court over it. This is unacceptable. The EC is working as per Amit Shah's instructions," she said while sitting outside booth number 7 in Boyal in Nandigram, where her partymen alleged many voters were unable to cast their ballot.

"Goons from other states are creating ruckus here," she said.

Banerjee also rang up the West Bengal Governor Jagdeep Dhankhar to complain about the situation. Dhankar tweeted soon afterwards to state "Issues flagged @MamataOfficial a while ago on phone have been imparted (sic) to the concerned."

"We have recorded 58 per cent voter turnout recorded till 1 pm in the 30 seats where polling is underway for the second phase," an Election Commission official said. The constituencies where polls are being conducted include nine seats each in Purba and Paschim Medinipur districts, eight in Bankura and four in South 24 Parganas. Strict adherence to COVID-19 protocols has been ensured in all places, officials said.

Both Banerjee and Adhikari fanned out to various polling booths in Nandigram to take stock of the situation after reports of stray violence and booth `jamming ', a bid by workers of one party to crowd out voters from a polling booth by forming long queues.

Surprisingly these incidents occurred despite Nandigram constituency being placed under Section 144 to contain possible violence.

In the Boyal area in Nandigram, villagers alleged that BJP supporters had stopped them from going to the polling booths.

As soon as Banerjee reached Boyal, BJP supporters greeted her with "Jai Shri Ram" slogans. Supporters of BJP and TMC allegedly indulged in violence, as TMC leaders demanded re-polling in booth number 7 of the village.

Police and Rapid Action Force were rushed to the spot to control the situation, amidst incidents of alleged stone pelting.

According to EC officials said they would look into the complaints. Around 57 per cent of electors exercised their franchise till 1 PM in the agrarian constituency in Purba Medinipur district, an Election Commission official said.

A TMC election agent's mother was seen pleading before the EC officials not to ask her son to go to the election booth and alleged that he has been "threatened last night by opposition parties".

Protesters also blocked the road in Nandigram's Block 1, alleging Central forces stopped them from going to the polling stations. "The CRPF personnel accompanying Suvendu Adhikari stopped us from casting our votes," a protester said.

On the other hand, Suvendu Adhikari's car, was attacked, and stones were pelted while he was visiting booths in the assembly constituency.

Two separate stone-pelting incidents took place in Takapura and Satengabari in Nandigram. His vehicle was gheraoed at various locations as TMC supporters shouted slogans against the BJP leader. Security forces patrolling the area dispersed the mob.

"I am used to such protests by TMC goons. They are all followers of Mamata begum (Mamata Banerjee). Let them do whatever they want till the results are out on May 2," Adhikari told reporters.

Three persons have been arrested in connection with the incident, they said.

More than 75 lakh voters will decide the fate of 191 candidates in the 30 constituencies for which voting ends at 6.30 pm.

Meanwhile, protesters blocked the road in Nandigram's Block 1, alleging, central forces stopped them from going to the polling stations. "The CRPF personnel accompanying Suvendu Adhikari stopped us from casting our votes," a protester said.

In the Gosaba area of South 24 Parganas, clashes were also reported between TMC and BJP supporters.

While in the Mahisadal seat, the TMC alleged that BJP workers had stopped voters from going to the polling stations. PTI