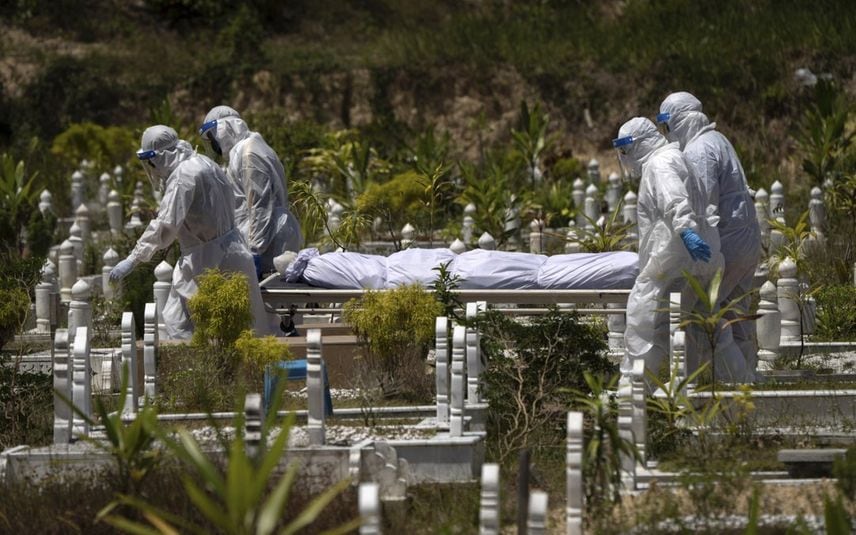 New Delhi: The Centre on Friday termed as "speculative and misinformed" a new study which claimed that India's estimated cumulative excess Covid deaths between January 2020 and December 2021 was around eight times higher than reported.

The Lancet reported on Thursday that although excess mortality rates due to Covid among Indian states are not the highest in the world, because of India's large population, the country accounted for around 22.3 per cent of global excess deaths as of December 31, 2021.

The documented deaths due to COVID-19 in India over that period was around 489,000, the Lancet said in its paper entitled 'Estimating excess mortality due to the COVID-19 pandemic: a systematic analysis of COVID-19-related mortality, 2020-21'.

It said India's estimated cumulative excess deaths due to COVID-19 between the period were the highest in the world at 4.07 million.

The Union Health Ministry reacted strongly to the study and termed it "speculative and misinformed".

In a statement, the ministry said the study provided estimates of all cause excess mortality for a number of countries based on a mathematical modelling exercise.

The study has concluded that although reported COVID-19 deaths between January 1, 2020, and December 31, 2021, totaled 5.94 million worldwide, but an estimated 18.2 million people died worldwide because of the COVID-19 pandemic (as measured by excess mortality) over that period, it said.

"This is yet another estimate on excess mortality due to COVID-19 by another set of researchers. Mathematical modelling techniques are essentially process of creating a mathematical representation of a real-world scenario to make a prediction.

"Such predictions are founded on certain set of inputs either based on real world scenarios, or approximations of those (which may vary in accuracy according to the technique used) inputs that are not available," the ministry said.

Often these studies involve taking a relatively small actual sample and extrapolating the result to the entire population, it said.

"While this may achieve near accurate results for a small homogenous country/region, such techniques have failed repeatedly to give reliable results for a large, diverse population.

"The study takes into account different methodologies for different countries and for India, for example, data sources used by this study appears to have been taken from newspaper reports and non-peer reviewed studies," it said.

The ministry said the methodology strangely adopts data from newspapers at varied intervals to extrapolate (without any scientific basis) for the total period under study.

"The pandemic had multiple surges during the period and varied trajectories across different states (sub-state level also) at any point of time. Hence the methodology used by this study is less than robust," it said.

The ministry said for states where Civil Registration System was available, reported deaths during the pandemic has been compared with average reported deaths for the same period in the year 2018 and 2019 which doesn't take into account multiple pandemic management efforts, including lockdown, containment zones, testing and contact tracing, wider dissemination and implementation of clinical management protocols and world's largest vaccination drive, which form the foundation of pandemic management in the country.

The ministry further clarified that the reporting of deaths is regularly done in a transparent manner and is daily updated in public domain on the website of Union Ministry of Health.

"Even the backlog in Covid mortality data submitted by the states at different times is reconciled in the data of Government of India on a regular basis. Furthermore, there is a financial incentive in India to report Covid deaths as they are entitled to monetary compensation. Hence, the likelihood of under-reporting is less," it said.

The ministry said it is noted that authors have themselves admitted that 'Direct measurement would be preferable to modelled excess mortality estimates not based on all-cause mortality data, which are usually more robust, from the locations themselves.'

"Further they have mentioned that as studies from a few selected countries, including the Netherlands and Sweden have suggested, we suspect most of the excess mortality during the pandemic is from COVID-19.

"However, sufficient empirical evidence is absent in most countries. Given the high amount of heterogeneity in epidemiological profiles among countries, it is prudent not to make such strong assumptions before more research on this topic is done," the ministry said.

The ministry also said that the authors have also accepted that 'strict lockdown and mediation interventions can lead to negative excess mortality during the pandemic'.

"They have themselves admitted that finally, the development and deployment of SARS-COV-2 vaccines have considerably lowered mortality rates among people who contract the virus and among the general population," it said.

"It is highlighted that quoting issues as sensitive as death, that too during an ongoing global public health crisis like pandemic COVID-19, should be dealt with facts and with required sensitivity. This type of speculative reporting has potential to create panic in the community, can misguide people and should be avoided," the ministry said.