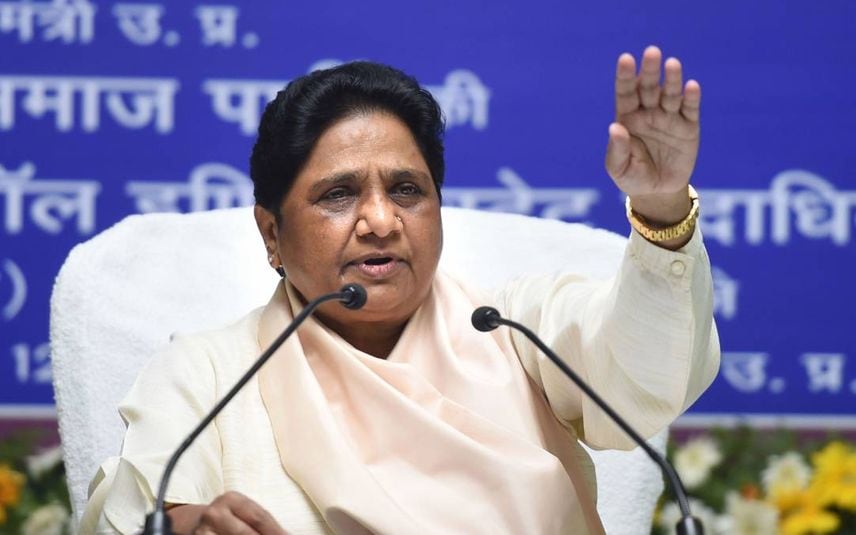 Lucknow: BSP chief Mayawati on Tuesday slammed the Uttar Pradesh government for not allowing opposition parties to stage protests against its "anti-people policies", a day after police thwarted a Samajwadi Party attempt to take out a rally in Lucknow.

The comment has triggered speculation that the Bahujan Samaj Party (BSP) may be warming up to its bitter rival SP ahead of the next general elections.

"Not allowing opposition parties to stage protests against the government's anti-people policies, autocratic behaviour and atrocities has become the new dictatorial behaviour of the BJP. Court cases, arresting people and the tendency to crush dissent is extremely dangerous," Mayawati said in a tweet in Hindi.

The tweet came a day after the police stopped a protest march taken out by the Samajwadi Party, led by its president Akhilesh Yadav, in Lucknow against price rise, unemployment, and the law and order situation in the state on Monday, the first day of the monsoon session of the state legislature.

The SP, however, said the idea of a tie-up with the BSP for the 2024 Lok Sabha elections was far-fetched.

"Mayawati was only referring to the provisions of the Constitution. Correlating it (her tweet) with a possible SP-BSP tie up for the 2024 Lok Sabha elections is a far-fetched idea," SP national spokesperson Rajendra Chaudhary said.

"The BJP is working against the Constitution. The citizens of the country, the opposition and social organisations have a right to protest," he said.

On Monday, the police stopped the SP protest march on the Vikramaditya Marg crossing in Lucknow after it started moving towards the Legislative Assembly.

Barred from marching to the Assembly, Akhilesh Yadav and other leaders of his party sat on a 'dharna' at the crossing and held a mock assembly session.

The police said the march was stopped because it had taken a different route than the one for which permission was granted.

Earlier on September 14, an SP stir under the statue of Chaudhary Charan Singh on the legislative assembly premises over the issues of price rise, unemployment and law and order was not allowed by the police.

Following the recent political developments in Bihar, where Chief Minister Nitish Kumar dumped the BJP and formed an alternative ministry with the RJD, the Congress and Left parties, talks have been doing the rounds if something similar could happen in Uttar Pradesh with the SP and the BSP joining hands against the BJP.

Though the BSP and the SP jointly failed to halt the victory run of the BJP in the state which sends the maximum number of 80 MPs to Lok Sabha, they had reduced the saffron party's tally in 2019 as compared to 2014.

In the 2019 election, the BJP won 62 seats, while its ally Apna Dal (Sonelal) emerged victorious in two constituencies. After the recent victory in the by-polls to Azamgarh and Rampur, the saffron party's number has gone up to 64 and the NDA's strength to 66.

In the opposition camp, the BSP has 10 MPs, the SP has three and Congress president Sonia Gnadhi is the lone MP of her party from Rae Bareli.

Nitish Kumar, who has emerged as a new hope of the opposition to take on Prime Minister Narendra Modi in the 2024 election, is making efforts to unite the opposition.

I am happy, a ray of justice belatedly: Siddique Kappan's wife on his bail

Private sector gets a leg up in National Geospatial Policy