She alleged that the government was "insensitive" towards the people's problems as it increased the prices 22 times in three months. 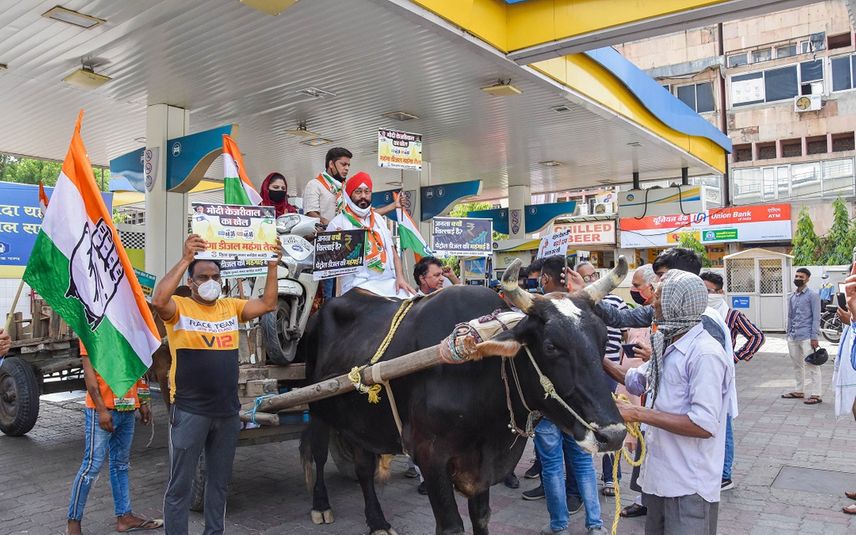 Congress workers ride a bullock-cart as they protest against price hike of petrol and diesel, at a Petrol Pump in east Delhi on Monday. (PTI Photo)

New Delhi: Congress interim president Sonia Gandhi on Monday demanded a rollback of the fuel price hike as the party held nationwide protests against the government over the rising petrol and diesel prices.

As a part of the party's 'speak up' campaign, Sonia Gandhi in a video appeal asked the government to cut taxes and lower the burden on the consumers during the time of the coronavirus when people are already suffering economically.

"I along with the Congress workers and citizens demand that the government should take back the hike in prices of diesel and petrol in these tough times," said Sonia Gandhi.

She alleged that the government was "insensitive" towards the people's problems as it increased the prices 22 times in three months.

"The government has earned extra Rs 18 lakh crore since 2014 and the crude oil prices have decreased worldwide," said Sonia Gandhi.

She said that in the national capital and other metros, the cost of petrol and diesel has crossed Rs 80 a litre.

The Congress workers used bullock carts, cycles and other means to demonstrate against the government. The protests will be held for five days

K. C. Venugopal, Congress General Secretary, said, "Today as a symbol of protest against the unjustifiable hikes in fuel prices, I rode my bicycle to Parliament as part of the nationwide movement started by Congress Party."

Since the daily price revision resumed on June 7, petrol price has increased by Rs 9.12 and diesel rose by Rs 11.01 in the national capital. In other cities also, the magnitude of the increase was similar.

PM Modi meets Droupadi Murmu, greets her on being elected as India's 15th ...