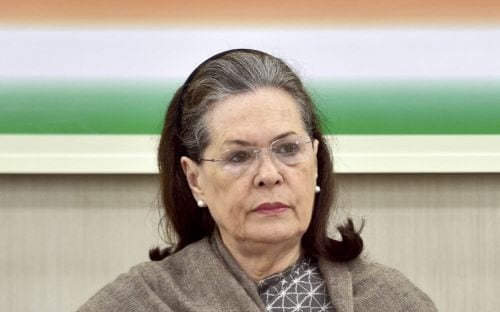 New Delhi: The BJP on Saturday alleged that Congress president Sonia Gandhi was the "driving force" behind the "conspiracy" to implicate then Gujarat chief minister Narendra Modi in the 2002 riots case in the state.

In a press conference, party spokesperson Sambit Patra claimed that the late Ahmed Patel, who was Gandhi's political adviser and a leading Congress leader, was just the medium through which she acted to destabilise the BJP government in the state and damage Prime Minister Modi's political career.

Sonia Gandhi should address a press conference on this, he demanded.

The ruling party's attack on her came a day after the Gujarat police's Special Investigation Team (SIT) opposed arrested activist Teesta Setalvad's bail application and claimed in an affidavit before a court that she was part of a "larger conspiracy" hatched by Patel to get the state government dismisses in after the 2002 riots.

Defending Patel, the Congress claimed earlier in the day that the charges levelled against him are part of Modi's "systematic strategy to absolve himself of any responsibility for communal carnage" unleashed when he was the chief minister.

"The prime minister's political vendetta machine clearly does not even spare the departed who were his political adversaries. This SIT is dancing to the tune of its political master and will sit wherever it is told to," the opposition party alleged in a statement.

Hitting back, Patra termed the Congress' statement as mischievous and asked if the Supreme Court had also acted under "pressure" when it had slammed Setalvad and other accused for their "ulterior designs" and called for them to be put in the dock, leading to registration of a case and their arrest by the Gujarat police.

The BJP leader said the Congress appears to be keeping various kinds of denials ready and releasing them by changing dates.

"We want Sonia Gandhi to hold a press conference and address the nation as to why she was conspiring against Modi," he said, claiming that his press conference is not an attack on Patel as he was just a medium through which Gandhi acted.

She hatched a conspiracy to malign Gujarat and corner Modi with an aim to damage him and the BJP to promote her son Rahul Gandhi, Patra claimed.

Citing the SIT affidavit, he claimed that Setalvad was given Rs 30 lakh for personal use by Patel. "Patel only delivered the money. Sonia Gandhi gave it," he alleged.

Patra noted that Setalvad, who has been pursuing Gujarat riots cases, was given Padma Shri and also made a member of the National Advisory Council when the Congress-led UPA was in power. Sonia Gandhi was behind this as she was happy with her work, he alleged.

"Patel is just a name. The driving force behind this conspiracy was Sonia Gandhi," he claimed.

Patra cited the Gujarat High Court's observations that Setalvad misappropriated funds meant for riot victims for personal use, including wine and holiday resorts, to hit out at her.

The truth in the entire case has revealed itself, Patra said, adding the BJP does not work with a vengeance but with patience and believes in the constitutional process.

Andhra doctor appeals to India to rescue his pet jaguar and panther from ...