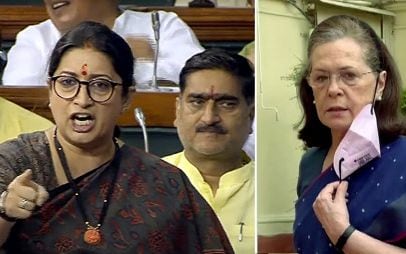 New Delhi: Congress Lok Sabha MP Adhir Ranjan Chowdhury on Friday alleged that Union Minister Smriti Irani was "yelling" the name of President Droupadi Murmu "without prefixing Madame or Smt" during her address in the House, the manner which "amounts to degrading the stature" of the highest office of the country.

The Congress MP demanded to expunge the "way Smriti Irani was addressing the Hon'ble President" from the proceedings of the House.

In a letter to Lok Sabha Speaker Om Birla, Chowdhury wrote, "I may also like to point out that the manner in which Smt. Smriti Irani was taking the name of Hon'ble Madam President in the House was not proper and in consonance with the status and position of the Hon'ble President. She was yelling 'Droupadi Murmu' repeatedly without prefixing Hon'ble President or Madame or Smt. before the Hon'ble President's name."

Notably, Irani in Lok Sabha had said the Congress should apologise in Parliament, and on the streets of India, to every citizen of India.

Meanwhile, mentioning the controversy (rashtrapatni remark) that led to the protests by the BJP in the Parliament complex, Chowdhury, who earlier termed the incident a "slip of tongue", said that the error took place because he is not well-versed in Hindi.

"I regret to say that this controversy erupted because of a mere slip of tongue on my part. This error occurred because my mother tongue is Bengali and I am not well versed in Hindi. It is really very sad that Madam Rashtrapati Ji's name is being unnecessarily dragged in order to gain cheap publicity and political one-upmanship by the ruling party," he wrote.

However, Chowdhury on Friday tendered an apology to President Droupadi Murmu over his controversial "rashtrapatni" remark.

This came a day after he said that 'there is no question of apologising as he had mistakenly referred to President Droupadi Murmu as Rashtrapatni''.

"I am writing to express my regret for having mistakenly used an incorrect word to describe the position you hold. I assure you that it was a slip of tongue. I apologise and request you to accept the same," reads a letter written by Chowdhury.

Speaking to ANI on Friday, Chowdhury said, "I am waiting for BJP to term me terrorist and arrest me under UAPA. They want to become champions of tribals but hide how murders are happening. Laws brought under Sonia Gandhi are being changed. They are working against tribals."

"I can't even think of insulting the President. It was just a mistake. If the President felt bad, I will personally meet her and apologise. They can hang me if they want. I am ready to get punished but why is she (Sonia Gandhi) being dragged in this?" Chowdhury told ANI on Thursday questioning why the Congress Interim President is being dragged into the controversy.

Adhir Ranjan Chowdhary said that he had used the term "rashtrapatni" for President Murmu by mistake and that the ruling party was deliberately trying to make a mountain out of a molehill.