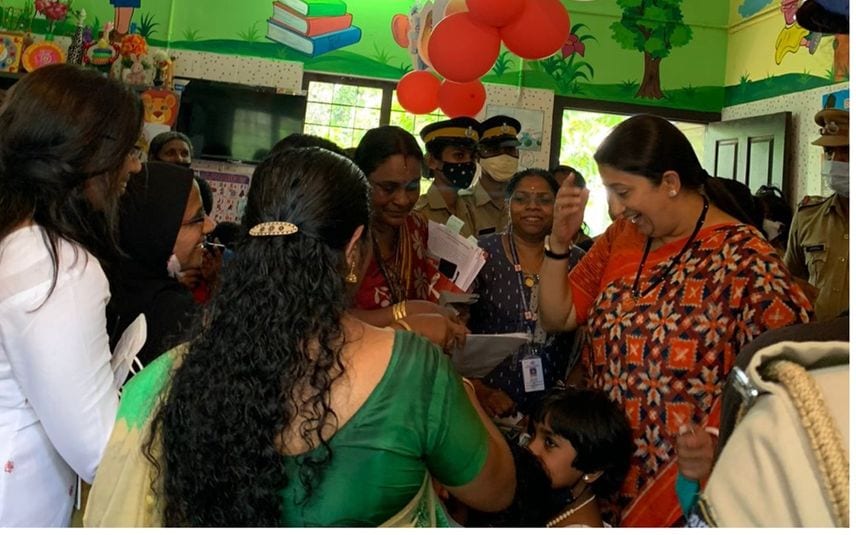 Wayanad: Union Minister Smriti Irani on Tuesday held a meeting with officials in Wayanad - the constituency represented by Congress leader Rahul Gandhi - to review the implementation of welfare works and schemes of the central government.

"In the aspirational district of Wayanad today, chaired a meeting with officials to review the implementation of welfare works and schemes of Central Government," Irani said in a tweet.

The Union Women and Child Development Minister also visited Varadoor Anganwadi Centre developed by a Central Government PSU as part of its CSR activities in Kaniyambetta Gram Panchayat of Wayanad district. She also spent time with children at Ponnada Anganwadi Centre in Kalpetta, Wayanad and interacted with tribal families of Maravayal and Ambalachal areas in Wayanad.

She released a video on Twitter about her constituency soon after the visit. Irani and Rahul Gandhi have been political rivals in Amethi since 2014. "For our friends in Wayanad… With warm regards, Amethi," she tweeted along with the video.

Irani also posted a video on Twitter with the caption "For our friends in Wayanad..." which accused Congress and Rahul Gandhi of stalling development in Amethi. The video talked about several development initiatives in Amethi which began after the BJP came to the power at the Centre in 2014. (ANI)