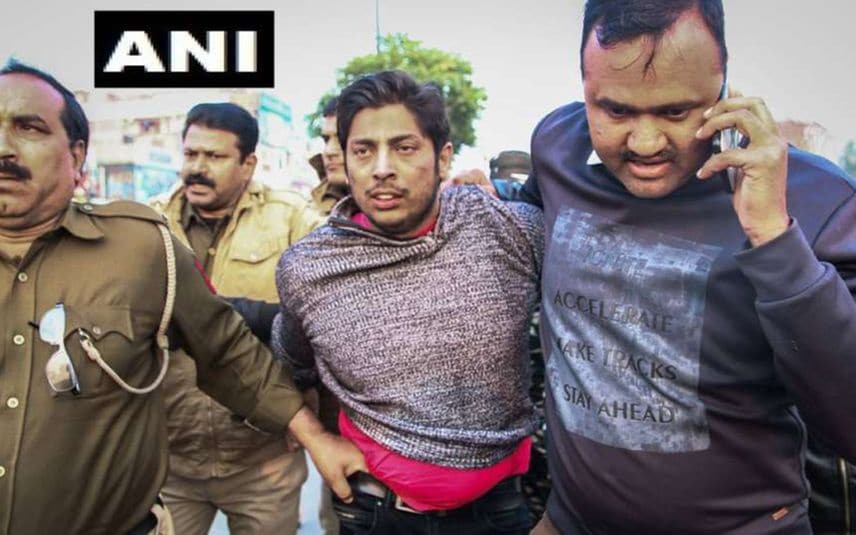 New Delhi: In a major twist in the second firing incident in the Shaheen Bagh area, the arrested accused Kapil Gurjar has been found to be a member of the ruling Aam Aadmi Party (AAP). However, AAP sources denied the allegation. AAP MP Sanjay Singh said they would approach the Election Commission over the matter.

The photographs released by the police also showed him with some AAP leaders. According to senior Delhi Police officers related to the probe, Gurjar was found to be connected with AAP.

The revelation has been made by the Crime Branch which is interrogating Gujjar, a resident of Dallupura village in east Delhi, who fired shots at Shaheen Bagh on February 1.

The officer said, "During investigation, Kapil Gurjar's phone was recovered and his photos with AAP's Sanjay Singh and Atishi Marlena have emerged."

Sanajay Singh is a Rajya Sabha member of the party while Atishi is contesting the Assembly elections in Delhi from Kalkaji. Atishi had also unsuccessfully contested the Lok Sabha elections from east Delhi.

The officer said that Gurjar in his statement to the police said that he and his father joined AAP in early 2019. According to the police, Gurjar's father Gaje Singh contested the polls twice on a Bahujan Samaj Party ticket (Jungpura in 2008 and Patparganj in 2012).

"They both joined AAP in early 2019. He had even deleted his photos from the phone but the same was recovered after technical help," the officer said.

He said that on the day of the incident, Gurjar came to Shaheen Bagh on a bike and with another person named Sarthak. "Sarthak has joined the investigation. Through technical surveillance and other evidences, including CCTV footages, it was found that he came through the DND flyover via Maharani Bagh to Holy Family hospital.

"At the parking lot of the hospital, Gurjar adjusted his pistol and then went to Shaheen Bagh," the officer said.

He further said that Gurjar sent back Sarthak by handing him his mobile phone.

"CCTV footage from the location has confirmed Sarthak's statement," the officer said.

Gurjar was arrested from Shaheen Bagh after he opended fire near the protest site. After his arrest, he said that "sirf Hinduo ki chalegi".

According to the police, the accused was annoyed over the protest at Shaheen Bagh and the ensuing road blockade for nearly 50 days now.