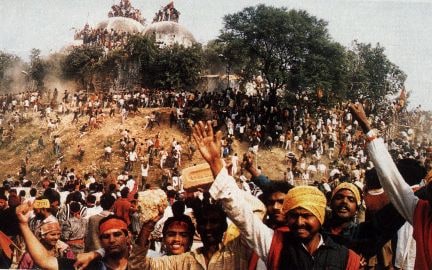 Thirty years back, on December 6, 1992, India witnessed one of the darkest events in its history since independence. It was a period when communal upheavals polarising people along religious lines gathered momentum and the slogan 'mandir wahi banayenge aur masjid thodkar hi banayenge' echoed across the Hindi heartland.

What followed afterwards was an orchestrated series of events, which ultimately culminated in a criminal act that claimed more than 2000 lives.

According to historical inscriptions, Babri Masjid or Mosque of Babur was built in 1528-29 CE by General Mir Baqi upon the orders of Emperor Babur, founder of the Mughal Empire. Constructed in a style developed under the Lodi dynasty, the mosque stood through years of communal tensions. Its location paved the way for clashes centuries later after Hindus asserted that it was built on top of Ram Janmabhoomi, the birthplace of Lord Ram.

While the political manipulations got expedited in the 1980s, the legal battle for the same was already set in the late 1850s. In 1858, the British colonial government erected a grill-brick wall around the Babri Masjid in order to avoid communal conflicts and maintain law and order. In later years, several cases and complaints were filed in connection with the mosque, with the noted ones being lodged in 1860, 1866, 1870 and 1885 among others.

The events took a drastic turn after India gained independence, witnessing a brutal, painful partition. In 1949, idols of Lord Ram 'appeared' or were covertly placed inside the mosque. At the time, a priest in Ayodhya claimed that he saw Lord Ram in his dream, who told him about the location of the idols.The incident led to an uproar among the devotees, who believed in the lord's miracles, and numerous cases were filed by both Hindus and Muslims in the coming years. Eventually, the site was closed off to both communities.

A year later, Gopal Singh Visharad of the Hindu Maha Sabha filed a civil suit in the Faizabad Court demanding to open the masjid premises for prayers. Suits seeking permission for pujas on the disputed ground were filed in 1959, 1961 and 1981 too. However, no parties were allowed to enter the area until February 1, 1986.

In 1985, then Prime Minister Rajiv Gandhi, who had got the apex court's verdict in the Shah Bano case undermined in parliament, in conformity with the Sharia Law, attempted to restore communal equilibrium by opening the doors of Babri Masjid to the Hindus. However, Gandhi's balancing act proved to be detrimental in the long run, particularly in the backdrop of a communally charged atmosphere, thanks to Ramananda Sagar's extremely popular soap opera 'Ramayan', which aired 78 episodes on Doordarshan.

Amid the ongoing court trials, the Vishwa Hindu Parishad (VHP), an arm of the Sangh Parivar, pushed the Ayodhya issue to the fore spearheading a new political strategy. By the late 1980s, the 'Ram Janmabhoomi' movement, with VHP at its forefront, began to gather steam and LK Advani became its de facto leader. They demanded to construct a Ram Temple at the disputed location.

Meanwhile, in 1989, all the cases related to the dispute were transferred to the Allahabad High Court. In September 1990, Advani led the 'Ram Rath Yatra', a political and religious rally organised by the BJP, RSS and the VHP, involving around 1,50,000 'kar sevaks' or volunteers to raise support for the Ram Mandir issue. The Yatra, which began from Gujarat's Somnath, was stopped by Bihar Chief Minister Lalu Prasad Yadav in Bihar. When the karsevaks' march to Ayodhya turned aggressive UP police resorted to firing ,which resulted in killing around 28 people on October 30, 1990.

On December 6, 1992 a mob of around 1,50,000 people gathered around the masjid premises to hear the speeches of the leaders of BJP and VHP. Within minutes the kar sevaks turned violent, overwhelmed the security forces and tore down the 400-year-old monument. The demolition began just before midday and lasted for some five hours.

More than 2,000 people were killed in communal clashes across India in the following days. According to report on The Wire, on the eve of December 6, kar sevaks started attacking Muslim residents of Ayodhya, ransacking and knocking down their houses. Additionally, riots broke out in different parts of the country, including Mumbai.Two FIRs were registered on the very same day. One was filed against the kar sevaks alleging offences of robbery, dacoity, promoting enmity between religious groups among others. Another FIR was lodged against eight leaders of the BJP, VHP, Bajrang Dal and RSS for provocative hate speeches.

While the whole tragedy took place, the union government led by Prime Minister PV Narasimha Rao and the security forces acted as mere spectators. In a later interview with Karan Thapar, Narasimha Rao called the incident 'pre-planned' and accused Chief Minister Kalyan Singh of playing tricks with him. 'We cannot stop people from going anywhere in the country. The moment I was able to act under the constitution, I acted,' said Rao. Even though Rao promised to rebuild the mosque, there was no follow up.

In Uttar Pradesh, Kalyan Singh's government had even submitted an affidavit to the Supreme Court assuring security of the mosque. Yet, nobody took any action while the structure was brought down by the kar sevaks.

The demolition of the Babri Masjid shook the very foundations of Indian secularism, generating a sense of betrayal and insecurity in the minds of the Muslims of the country. Many consider the demolition as an act of political vandalism. What followed was a series of events and court battles, which reached a culmination in 2020.

Timeline of the case

· 1993 - Centre acquired 67.703 acres of land in and around Babri Masjid under the Ayodhya Act; Chargesheet filed against Advani and 19 others

· 1994 - Uttar Pradesh Chief Minister Kalyan Singh found guilty, sentenced to a token imprisonment of one day and a fine of Rs 20,000

· 2005 - Lashkar-e-Taiba attack on the disputed complex in Ayodhya

· 2019 - SC declared demolition of Babri Masjid illegal; ruled Hindu parties will be given the disputed land and Muslims be given five acres at a separate prominent location in Ayodhya

In February 2020, Prime Minister Narendra Modi announced in Lok Sabha that the government gave approval to the proposal for 'Shri Ram Janmabhoomi Tirtha Kshetra' trust to monitor the construction of a grand Ram temple in Ayodhya. The foundation stone for the project was laid six months later.

As per media reports, nearly half the construction work of the temple has been completed and it is likely to be opened by January 2024.

Year after groundbreaking, work on Ram temple foundation now over