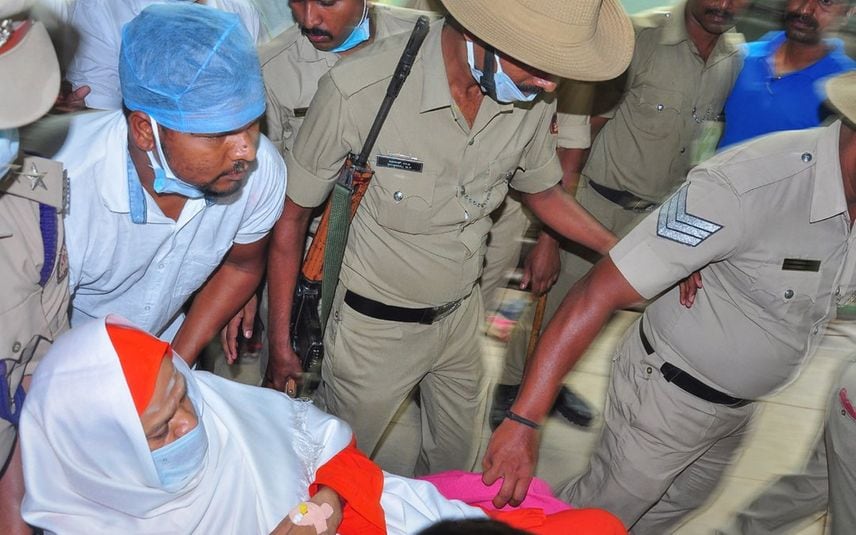 Chitradurga (K'taka): Chief pontiff of Murugha Math Shivamurthy Murugha Sharanaru, who has been arrested for alleged sexual abuse of two minor girls, was on Friday remanded to police custody till September 5.

The seer was arrested on Thursday night and sent to jail in the early hours of Friday where he developed health complications.

He was taken to the district hospital, where medical tests were conducted. The medical team which examined him was contemplating to shift him to Sri Jayadeva Institute of Cardiovascular Sciences and Research in Bengaluru for treatment, sources said.

The 64-year old Sharanaru was produced on Friday in the local court, which remanded him to police custody for four days. The seer, wrapped himself in a white cloth around his saffron attire, was taken in a wheelchair to the court.

Sharanaru has been booked under provisions of the Protection of Children from Sexual Offences (POCSO) Act and the SC/ST (Prevention of Atrocities) Act for allegedly sexually abusing two high school girls, studying in a school run by the Math and staying in hostel also belonging to it.

The pontiff of one of the most prominent and influential Lingayat Maths in the State was questioned by police for several hours on Thursday night.

Meanwhile, Chief Minister Basavaraj Bommai said the police have been given a free hand to investigate the sexual abuse case in accordance with law.

He did not wish to comment on allegations regarding the "delay" in the arrest of the seer.

"There is no need to respond to all these talk. I have already said that everything will happen in accordance with law. It is not right to comment on the case at the present situation," Bommai said in the coastal city of Mangaluru in response to a question on delay in the seer's arrest.

Leader of Opposition in the Karnataka Assembly Siddaramaiah sought an impartial probe by the police, based on the complaint lodged by victim-girls, in connection with the case.

Becoming the first senior leader from the opposition Congress to comment on the case, the former Chief Minister said the allegations against the seer were "serious" in nature.

"The allegations against Chitradurga Muruga Mutt Swamiji is (are) serious. The police should carry out (an) impartial investigation based on the complaint filed by the girls and reveal the truth," Siddaramaiah tweeted.