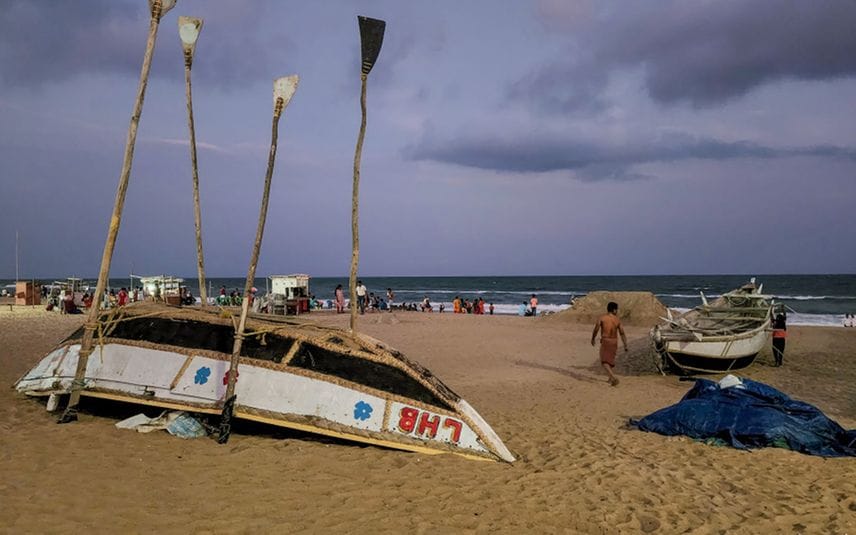 The system lays centered around 550 km southeast of Visakhapatnam in Andhra Pradesh and 680 km south-southeast of Puri in Odisha at 5.30 am on Monday and was moving towards the coast at 25 kmph, a bulletin issued by the India Meteorological Department (IMD) at 8.45 am said.

Distant warning signal 2 (asking ships not to come near the coast) has been hoisted in all ports in Odisha in view of the approaching severe cyclone.

"The system is very likely to move northwestwards till Tuesday and reach westcentral and adjoining northwest Bay of Bengal off north Andhra Pradesh & Odisha coasts," the weather office said.

"Thereafter, it is very likely to recurve north-northeastwards and move towards northwest Bay of Bengal off Odisha coast. It is likely to weaken gradually into a cyclonic storm during the next 48 hours," the bulletin said.

The system will not make landfall either in Odisha or Andhra Pradesh, IMD Director General Mrutunjay Mohaptra had said on Sunday.

He had said the cyclone will move parallel to the east coast and cause rainfall.

The weather office said very high sea conditions were likely to prevail over westcentral and adjoining south Bay of Bengal and asked fishermen not to venture out in the region for the next couple of days.

Under the influence of the cyclone, coastal Odisha and adjoining areas of north coastal Andhra Pradesh and coastal West Bengal are expected to receive rainfall from Tuesday evening, the weather office said.

With the IMD predicting 7-11 cm rainfall in parts of coastal Odisha, the state government has identified 15 blocks in four districts spread over Ganjam, Puri, Jagatsinghpur and Kendrapara where normal life may be affected due to the downpour.

Special Relief Commissioner P K Jena has asked the district collectors to evacuate people from the 15 blocks to safety.

He said that state does not expect wind speed above 60 kmph but people residing in kutcha houses may be vulnerable due to heavy rainfall.

Jena also asked officials concerned to admit women in advance stages of pregnancy to hospitals before due date.

"Rainfall may increase as the day progresses. There are predictions of heavy rainfall and thunderstorms. We advise people to stay in safe places during rainfall," he said.

In Andaman and Nicobar Islands, however, normal life remained unaffected as no rainfall was experienced on Monday. Inter-island ferry services were operational but fishermen were advised not to venture into deep seas, officials said.

Moderate rainfall was experienced in the archipelago on Sunday morning and evening, they said. PTI