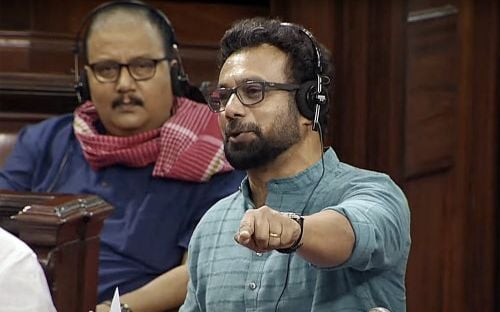 New Delhi: Civil Aviation minister Jyotiraditya Scindia on Monday took a swipe at the CPI-M saying the party should take one stand on the issue of government's aviation policy after its member in Rajya Sabha called for allowing foreign carriers in domestic air cargo operations in non-metro cities.

He also informed the upper house that domestic freighters in the country have increased from 8 to 28, a surge of almost 3.5 times.

Replying to supplementaries from CPI(M)'s John Brittas during Question Hour in Rajya Sabha, Scindia said the member and his party should be supporting the government on the issue and help in the cause of 'Atma Nirbhar Bharat'.

"Because of Covid, all of our carriers were almost entering a period of insolvency and this has given a glimmer of hope to them. From 8 to 28 domestic freighters, there has been an increase in domestic freighters category to almost 3.5 times. Indian carriers are now beginning to stand on their own feet," Scindia said.

The CPI-M has been against the privatisation of Air India and other public sector undertakings.

"I'm sure the party he belongs to, this is an ideology he would support. Otherwise, they should not take a different stand with regard to other issues, with regard to the economy and civil aviation," the minister said.

Brittas was criticising the government for revoking permission to foreign non-scheduled cargo services from landing in airports other than six metros.

Scindia informed the House that Indian Airlines have modified 150 passenger aircraft to carry freight and cargo and the cargo capacity of domestic operators has increased.

"The revenue from cargo has grown in the last one year from Rs 1,498 crore to Rs 2,300 crore. Indian cargo and air freighters are beginning to stand on their own feet and that is 'Atma Nirbhar Bharat'," the minister said.

He said the trade in cargo across the world is close to 270 Billion USD, which is about to grow to 375 billion USD and the air trade to GDP ratio in India has grown to about 4-8 percent and the Air cargo section should double in the next couple of years.

Only 2 per cent of the 10 per cent is conducted in other airports of the country, which comes to 0.2 per cent of total air cargo business, he said.

"There is no ban on air cargo business which is only 2 per cent," he said, adding that 71 per cent of cargo to India is carried in the belly of the aircraft.

"I'm sure the member (Brittas), the state that he comes for and the party that he belongs to, will fight for the cause of 'Atmanirbhar bharat' and for the cause of Indian carriers," Scindia told Brittas.

To another supplementary from Naresh Gujral (SAD) that carriers are refusing to lift cargo even from Delhi due to which exporters are facing problems, the minister said, "This is not a fact. I refute this on the floor of the House.

"Instructions have been issued in this regard by the DGCA in September 2020. This facilitates Indian airlines in the international cargo trade. There is no proposal at present to review the policy.