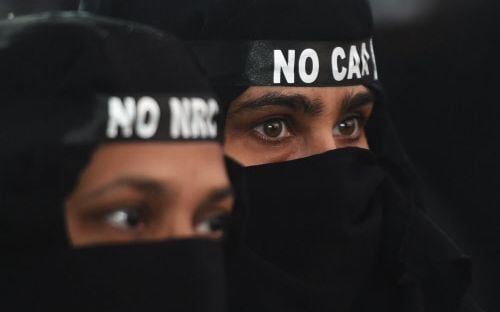 New Delhi: The Supreme Court said on Monday it will hear on October 31 a batch of pleas challenging the constitutional validity of the Citizenship (Amendment) Act (CAA) which seeks to grant citizenship to non-Muslim migrants fleeing religious persecution in Pakistan, Bangladesh and Afghanistan who entered India on or before December 31, 2014.

A bench comprising Chief Justice U U Lalit and Justice S R Bhat noted the matter will be referred to a three-judge bench.

The 2019 amended law, which seeks to grant Indian citizenship to non-Muslim migrants belonging to Hindu, Sikh, Buddhist, Christian, Jain, and Parsi communities from Pakistan, Bangladesh and Afghanistan has come in for stinging criticism by opposition parties, leaders and other entities over exclusion of Muslims.

During the hearing on Monday, Solicitor General Tushar Mehta, appearing for the Centre, told the bench that several issues have been raised in the petitions filed before the top court.

"Our reply is filed so far as some amendments and challenge is concerned. In some of the matters, our reply is yet to be filed," he said.

Mehta said some time would be required for preparation and also for the hearing the matter.

The bench said the office of the Solicitor General shall prepare a complete list of matters which shall be put in different segments depending upon the challenge raised in the petitions.

"The Union of India shall thereafter file its appropriate responses with respect to these segments of challenges," the bench said, adding, "Let the needful in that behalf be done within four weeks from today."

The bench noted that its attention has been invited to the apex court's January 22, 2020 order, in terms of which matters coming from Assam and North-East were already directed to be segregated.

"List these matters before the court for direction on October 31," it said, adding, "In the meantime, let notices be issued in all fresh matters wherever notice uptil now has not been issued by this court."

"Put the house in order and take it that we will be making a reference to a three-judge combination," the bench orally observed.

Advocate Prashant Bhushan, appearing in the matter, said these are "very important matters hanging fire for a very long time" and they need to be heard and decided quickly.

“We just had a discussion on the point that should we make a reference to at least three judges of this court. What I felt wtoas let all these preliminaries be over and then we can make a reference,” Justice Lalit observed.

A total of 220 petitions were listed for hearing, including the lead plea by the Indian Union Muslim League.

In January 2020, the apex court had made it clear it will not stay the operation of Citizenship (Amendment) Act without hearing the Centre.

Seeking a response of the central government in four weeks to a batch of pleas challenging the CAA, the top court had also restrained high courts in the country from proceedings with pending petitions on the issue.

The Indian Union Muslim League (IUML), one of the petitioners that have challenged the CAA, has said the Act violates the fundamental Right to Equality and intends to grant citizenship to a section of illegal immigrants by making an exclusion based on religion.

The plea by IUML, filed through advocate Pallavi Pratap, seeks an interim stay on the operation of the law.

One of the pleas filed by Congress leader Jairam Ramesh has said the Act is a "brazen attack" on core fundamental rights envisaged under the Constitution and treats "equals as unequal".

Several other petitions have been filed challenging the constitutional validity of the amended law, including by RJD leader Manoj Jha, Trinamool Congress MP Mahua Moitra, and AIMIM leader Asaduddin Owaisi.

Muslim League moves SC against granting citizenship based on religion