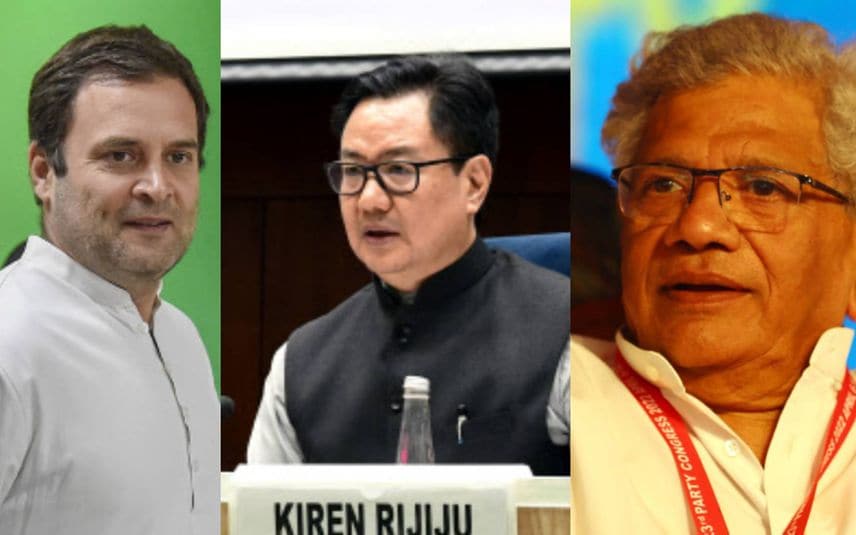 New Delhi: As the Supreme Court put the application of sedition law on hold, the Opposition on Wednesday hailed the decision, saying the voice of truth can no longer be suppressed even as the government invoked the "Lakshman Rekha" to assert that none of the institutions should not cross the "boundary".

With the Opposition targeting the Centre after the Supreme Court's decision, the ruling BJP said the order must be viewed in the context of the overall positive suggestion of the government that it wishes to examine the matter which has been "duly accepted" by the court.

Union Law Minister Kiren Rijiju invoked "Lakshman Rekha" guiding different institutions, including the Executive and the Judiciary, and said no one should cross their "boundary".

In its significant order on the sedition law that has been under intense public scrutiny, a bench headed by Chief Justice N V Ramana said there was a need to balance the interest of civil liberties and the interests of citizens with that of the State.

Taking note of the concerns of the Centre, the apex court said the rigours of Section 124A (sedition) of the IPC is not in tune with the current social milieu” and permitted reconsideration of the provision.

The bench, also comprising justices Surya Kant and Hima Kohli, stayed all proceedings in sedition cases while directing the Centre and states to not register any fresh FIR invoking sedition charges until the sedition law is "under reconsideration".

The government in an earlier affidavit had said that it was willing to consider the issues involving the law.

Referring to the affidavit, BJP spokesperson Nalin Kohli said, "The Supreme Court order must be viewed with the overall positive suggestions of the government that it wishes to examine the matter. It has been duly accepted by the court."

Kohli noted that the Modi government has so far removed over 1,500 archaic and obsolete laws and over 25,000 compliances to make citizens' lives easier.

The Congress hailed the Supreme Court's decision, saying a clear cut message has gone to subjugators of dissent that "you can no longer suppress the voice of truth" and those critical of the government must be heard.

Hitting back at Gandhi for his remarks, Rijiju dubbed Congress as the "antithesis" of freedom, democracy and respect for institutions and said these were "empty words" by the Congress leader.

"If there is one party that is the antithesis of freedom, democracy and respect for institutions, it is the Indian National Congress. This party has always stood with Breaking India forces and left no opportunity to divide India," he said.

Rijiju asserted that the NDA government under Prime Minister Narendra Modi will always protect the unity, integrity and sovereignty of India. "It will also protect the values enshrined in our Constitution. Congress party and its eco-system of the Tukde Tukde gang have no right to give sermons to others," he shot back.

Congress's chief spokesperson Randeep Surjewala said speaking truth to power cannot be sedition for it is "true nationalism and the true test" of how committed one is to the country and to the people.

"Supreme Court has finally spoken in a historical verdict by staying the sedition law. A clear cut message has gone today to suppressors and subjugators of public opinion, of dissent, of everyone who criticises the autocratic and dictatorial rulers and their policies, that you can no longer suppress the voice of truth, dissent, those critical of government must be heard and course corrections need to be done," Surjewala said in a statement.

Reacting to the development, the Left parties demanded that the Supreme Court should scrap the sedition law altogether and not wait for the government to review the same.

"The CPI(M) has always opposed the sedition law, saying it is anachronistic, brought in by the British to crush our freedom struggle and it has no place in the statute books in independent India. It's good that the SC has now ordered that this section must be kept in abeyance... The plea of the Modi government that it will review the cases is specious because it has been grossly misusing the sedition law to harass all dissent since 2014," CPI(M) general secretary Sitaram Yechury said at a press briefing here.

The CPI issued a statement welcoming the verdict by the Supreme Court and reiterated its demand to scrap the law. It claimed that the party's consistent position on this stood vindicated.

AAP Rajya Sabha MP Sanjay Singh also welcomed the Supreme Court's decision to put on hold the sedition law and alleged that the BJP was using it to suppress those raising voice against its government.

Meanwhile, the Editors Guild of India also welcomed the interim order of the Supreme Court.

New Delhi: The Delhi High Court Wednesday delivered a split verdict on the issue of criminalisation of marital rape with one of the judges favouring striking ..