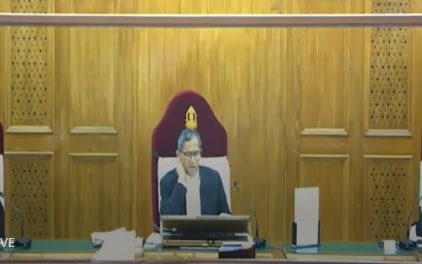 New Delhi: The Supreme Court and the National Informatics Centre (NIC) currently do not have “sufficient technical and infrastructure wherewithal” to live-stream court proceedings without third party applications, the top court registry has said in reply to the plea of former RSS ideologue K N Govindacharya.

The top court had on October 17 issued a notice to its Registry on a plea by Govindacharya seeking a direction for a special arrangement with YouTube for safeguarding the copyright over the court's live-streamed proceedings as held in a 2018 judgement.

“The technology is constantly improving and the respondent no. 1 (SC Registry) has been persistently working to develop a self-reliant system. It may be brought to the kind notice of the Hon'ble Court that not only the Registry, but NIC as well, at present, does not have the sufficient technical and infrastructure wherewithal to host the live streaming completely on its own without third-party applications and solutions,” H S Jaggi, Registrar of Computer Cell of the Supreme Court, said in an affidavit.

Govindacharya, through lawyer Virag Gupta, has said the live streaming of the Supreme Court's proceedings has to be done in accordance with the apex court judgment on the issue in which it was said the copyright over the live-streamed proceedings cannot be surrendered and the data can neither be monetised nor used commercially by platform like YouTube in the present case.

The registrar, in the affidavit, said the top court registry is constantly working towards achieving the goal for a “self-sustained, self-contained and self reliant live-streaming platforms”.

The reply said the dependence on third party applications is “inevitable” to offer the live streaming services to a larger audience.

“This, however, is a temporary/interim measure. It is a work in progress and all efforts are being made towards making the entire live streaming a self-contained eco-system,” the registry told the top court.

It said due to technical constraints, the apex court registry, as temporary a measure, is constrained to avail the facilities of third parties to ensure compliance of the directions of this court issued in 2018 in the Swapnil Tripathi case to live-stream proceedings in matters pertaining to constitutional importance.

The registry referred to the methods being adopted by the top court in ensuring live streaming of the proceedings.

It said the computer cell of the apex court relies upon its Video Conferencing platforms, CISCO, WebEx coupled with the latest VC hardware and infrastructure.

“The computer cell provides the VC content through live stream link to the NIC. Further, the NIC also encodes the URL and publishes it through YouTube, NIC Webcast portal. Lastly, the links generated are also shared on the Supreme Court website for live streaming,” it said.

Govindacharya, in his plea, has sought a direction to the apex court's registry to enter into “a special agreement with YouTube for safeguarding the copyright over live streaming and archived judicial proceedings" in accordance with the directions in the judgment delivered earlier by the apex court.

On September 27, the top court had for the first time started live-streaming its Constitution bench proceedings related to the hearing of pleas challenging the reservation for the Economically Weaker Sections (EWS) and a row over control of services between the Centre and the Delhi government.

Lawyer Gupta had, on September 26, mentioned the plea for urgent listing.

He had referred to the terms of use of YouTube and said the private platform also gets the copyright of the proceedings if those are webcast on it.

Referring to a 2018 judgment, the lawyer had said it was held that "the copyright over all the material recorded and broadcast in this court shall vest with this court only".

In a unanimous decision taken at a full court meeting headed by the then CJI, the apex court had decided to live-stream the proceedings of all Constitution bench hearings from September 27, four years after the path-breaking judgment on it by Justice Dipak Misra, the then CJI, in 2018.

While issuing the notice on the plea of Govindacharya, a bench comprising the then Chief Justice U U Lalit, since retired, and Justice Bela M Trivedi had observed that the court has taken steps for live streaming of the proceedings of its Constitution benches and it has also been decided that its scope can be expanded, having learned from this experience.

Recently, on November 25, a bench headed by present CJI D Y Chandrachud said it would be taking steps to have its own infrastructure to start live-streaming of the proceedings whose access will be given to "bona fide" persons like litigants, asserting it has to be ensured that the "sanctity of the institution is maintained".