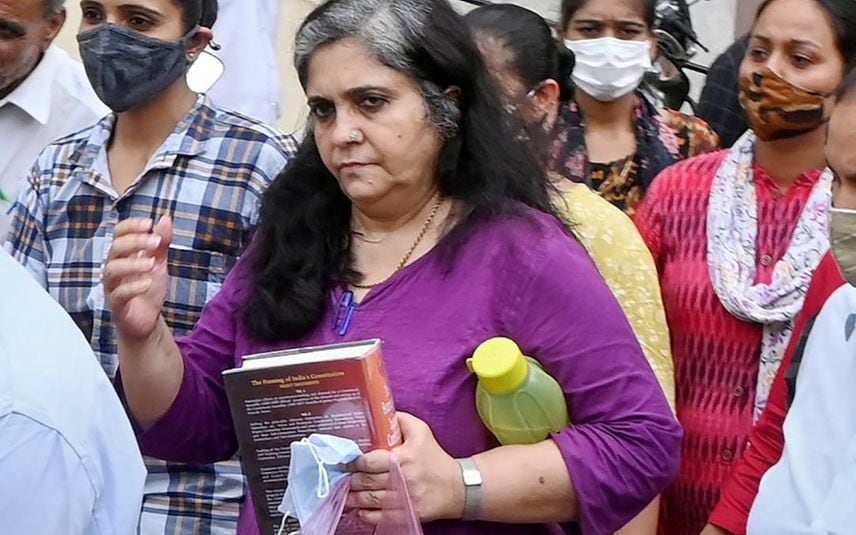 New Delhi: The Supreme Court on Friday granted interim bail to activist Teesta Setalvad in a case in which she was arrested for allegedly fabricating documents to frame innocent people in the 2002 Gujarat riots cases. The apex court directed Setalvad to surrender her passport till the matter is considered by the High Court.

A bench of Chief Justice UU Lalit, Justice S Ravindra Bhat and Justice Sudhanshu Dhulia said that in its view Setalvad is entitled to release on interim bail.

In its order, the top court noted that Teesta, a lady, has been in custody since two months and the investigative machinery has had the advantage of custodial interrogation of her for seven days.

"In our view, the appellant (Setalvad) is entitled to the release on interim bail... We are not considering whether Setalvad is released on bail or not and High Court shall decide the same. We are only on during the pendency of such application, should the custody of the appellant be insisted upon or be granted interim bail. We have considered the matter only from the standpoint of interim bail... Thus, we grant Teesta Setalvad interim bail," the bench stated in its order.

It added, "The entire matter on merits shall be considered by the High Court independently and uninfluenced by any observations made by this court. It is clarified that the order passed considering facts including that she is a lady and shall not be used by other accused and submissions of other accused be considered purely on their merits."

The order of the apex court came on a plea of Setalvad seeking interim bail. She has approached the top court against the August 3 order of the Gujarat High Court which issued notice to the Special Investigation Team (SIT) seeking its response to bail applications filed by Setalvad and former Gujarat Director General of Police (DGP) RB Sreekumar and posted the hearing on September 19.

Yesterday, the apex court bench took objection on the conduct of the Gujarat High Court where the High Court had issued a notice of Setalvad's plea on August 3 but posted the matter for further hearing after six weeks on September 19.

It had asked Solicitor General Tushar Mehta appearing for Gujarat to give it a case where a lady is in confinement on charges like this and the High Court has given a date after six weeks and asked if is the normal pattern in bail cases like this.

Mehta today produced orders passed by High Courts in which long dates were given saying that Setalvad was not singled out and this has been the uniform practice in High Court in similar cases.

Solicitor General argued that there is sufficient material apart from FIR pointing towards the involvement of Setalvad in the offences alleged.

Earlier, the top court filed an affidavit and told the apex court there is a strong case made out against Setalvad for some of the most serious offences whereby criminal conspiracy was hatched for and by fabricating false evidence with a clear intention to get a conviction of several persons for capital punishment 2002 Gujarat riots.

The affidavit of the Gujarat government has stated that the FIR against Setalvad for falsifying evidence related to the riots, is not solely based on a top court judgment but is backed by evidence.

Systematic efforts were made to ensure that both oral and other evidence is fabricated, the affidavit stated.

Setalvad and Sreekumar had approached the High Court after their bail applications were rejected by the Ahmedabad city sessions court.

On July 30, the Ahmedabad sessions court had refused to grant bail to Setalvad and Sreekumar while noting that the accused appeared to have aimed to "destabilise" the Gujarat government and defame the state for their ulterior motives.

They were arrested by the Ahmedabad Police Crime Branch on June 25 on the basis of a First Information Report (FIR) registered against them under sections 468 (forgery for cheating) and 194 (fabricating false evidence with intent to procure conviction for capital offences) of the Indian Penal Code.

The SIT formed to probe the case has alleged that Setalvad and Sreekumar were part of a larger conspiracy carried out at the behest of late Congress leader Ahmed Patel to destabilise the then Bharatiya Janata Party (BJP) government led by Narendra Modi, who was the Chief Minister of Gujarat at the time.

Former IPS officer Sanjiv Bhatt is also an accused in the case.

The FIR against Setalvad, Sreekumar, and Bhatt was registered after the Supreme Court had on June 24 dismissed the plea filed by Zakia Jafri, widow of former Congress MP Ehsan Jafri, challenging the clean chit given by the SIT to Prime Minister Narendra Modi and several others in 2002 Gujarat riots.

Ehsan Jafri was among 69 people killed during the violence at Gulberg Society in Ahmedabad on February 28, 2002. Zakia Jafri has challenged the SIT's clean chit to 64 people including Narendra Modi who was the Gujarat Chief Minister during the riots in the State.

She had alleged a "larger conspiracy" behind the post-Godhra incident riots.

However, the SIT in the apex court had opposed the plea of Jafri saying there is a sinister plot behind the complaint to probe the "larger conspiracy" behind the 2002 Gujarat riots and the original complaint by Jafri was directed by Teesta Setalvad, who levelled allegations just to keep the pot boiling. (ANI)

SC asks CBI, Gujarat why they want activist Teesta Setalvad, her husband back in jail