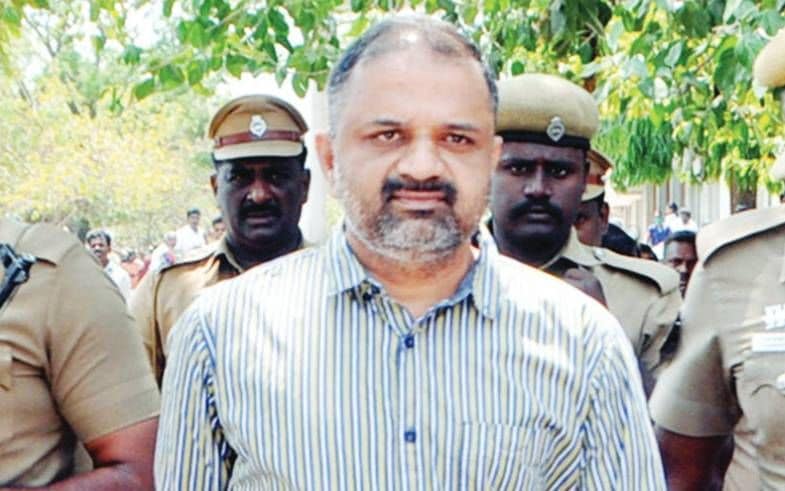 The Supreme Court on Wednesday granted bail to AG Perarivalan, one of the convicts serving life imprisonment in connection with the assassination of former Prime Minister Rajiv Gandhi.

The top court granted relief to Perarivalan taking into consideration his conduct, ill health and the fact that he has spent more than 30 years in prison.

A bench of Justices L Nageswara Rao and BR Gavai noted that there were no complaints about his conduct when he was released thrice before on parole.

Perarivalan was ordered to be released on bail for the first time since he was arrested.

"There is sufficient material produced by the petitioner regarding his conduct, his ill health, educational qualification and taking into account the fact that he has spent more than 30 years in prison, we are of the view that he should be released on bail," said the bench in its order.

The bench said that the bail will be subject to the satisfaction of the trial court's conditions and also, the petitioner has to report to the local police at his native place during the first week of every month.

The bench also took into note that Governor is yet to decide Perarivalan's plea seeking release from prison.

The apex court granted bail to Perarivalan despite the Centre opposing his bail plea vehemently.

Additional Solicitor General KM Nataraj, appearing for the Centre, said that he had already availed the benefit of reduction of death sentence to life term by citing delay in deciding his mercy plea and cannot claim more benefit by citing another delay.

In view of the stand taken by the Union of India that the State government has no power to make a decision on mercy petition especially when the death was commuted to life, the matter is to be heard finally, said the top court and posted the matter for hearing in April.

ASG Nataraj said that the Central government (President) is the appropriate authority to decide his request.

The bench also took into consideration of senior advocate Gopal Shankarnarayan, appearing for Perarivalan, that the conditions of his parole are very restricted and he cannot go outside his house and there is vigilance.

Shankaranarayanan submitted that Perarivalan has been granted parole three times and there has been no case of misconduct. During the sentence period, his conduct was good and he has acquired educational qualifications and rendered assistance in the library in jail, he added.

Before granting bail, the apex court has said that the case highlights a "very important" issue on whether a Governor can "sit on" plea for remission despite State Cabinet's approval.

Perarivalan had approached the top court seeking release from the prison based on the recommendation made by the Tamil Nadu government in September 2018.

The central government had earlier apprised the apex court that the Tamil Nadu Governor, after considering all the facts on record and relevant documents, said that the President of India is the "appropriate competent authority" to deal with the pardon plea of AG Perarivalan, a convict in the Rajiv Gandhi assassination case.

The top court by its January 21, 2021 order had asked the Governor to decide the Perarivalan's remission of sentence plea.

The top court had earlier expressed unhappiness over the fact that the recommendation made by the Tamil Nadu state government for the remission of the sentence had been pending before the Governor for over two years.

Rajiv Gandhi was assassinated on the night of May 21, 1991, at Sriperumbudur in Tamil Nadu by a woman suicide bomber, identified as Dhanu, at a poll rally.

On February 18, 2014, the apex court had commuted the death sentence of Perarivalan to life imprisonment on grounds of a delay of 11 years in deciding the mercy pleas by the Centre. (ANI)